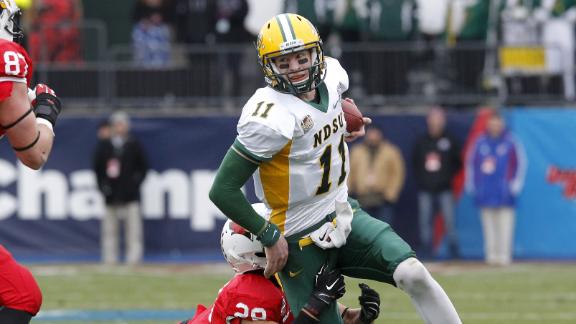 FRISCO, Texas -- Carson Wentz didn't come all the way to Texas to be the quarterback for the end of North Dakota State's run of FCS championships.

Faced with that unsettling possibility, Wentz answered with a dramatic history-making drive.

Wentz ran 5 yards for the winning touchdown about a minute after Tre Roberson's 58-yard run put Illinois State ahead, and the Bison became the first team to win four straight FCS titles with a thrilling 29-27 victory Saturday.

"Right when that clock hit zero, I had so many emotions I couldn't say anything," Wentz said. "I didn't know whether to cry or to be happy. It was just unbelievable."

North Dakota State (15-1) lost a nine-point lead in the fourth quarter, but answered quickly after falling behind. RJ Urzendowski had catches of 32 and 33 yards to get the Bison in scoring range, and Wentz broke a tackle around the 5 and eased into the end zone with 37 seconds left, capping a 78-yard drive in six plays.

Roberson threw three touchdown passes, but also an interception to Esley Thorton in the final seconds trying to get the Redbirds (13-2) in field goal range in their first national title appearance.

"Like we have all year long, we fought really hard to get back in the game after some mistakes and were able to take the lead," Illinois State coach Brock Spack said. "They made some big-time plays at the end to win it. It was just very, very close."

It looked as if the Bison would finally have a disappointing trip to the professional soccer stadium north of Dallas that has become their second home when Roberson faked a handoff to 2,000-yard rusher Marshaun Coprich, went to his left and cut upfield on the midfield logo. He ran untouched to the end zone.

A failed 2-point conversion left the Redbirds with a 27-23 lead with 1:38 remaining.

Wentz hit Urzendowski on a crossing route for 32 yards on the first play of the next drive, and later unloaded the ball deep with pressure coming when Urzendowski, a freshman who had 100 yards on five catches, found the ball while safety DraShane Glass never looked back for the throw inside the 10.

Wentz scored on the next play, to the delight of yet another mostly green- and yellow-clad crowd that celebrated again about 40 miles from where Oregon and Ohio State will play for the first title in FBS' College Football Playoff National Championship Presented by AT&T on Monday night.

"The first one, I don't know. We didn't draw it up like that," said Wentz, who had 237 yards passing and a touchdown and another 87 yards on the ground. "And the second one, quite frankly, was a terrible throw. RJ made a heck of a play."

The Bison won a de facto Missouri Valley Conference title game between league co-champions that didn't play in the regular season -- the first time two teams from the same conference have played for the FCS crown.

Wentz led a rally that added a title a year after predecessor Brock Jensen set an FCS record for quarterbacks with 48 victories.

"With our guys, I never saw any doubt in their mind," said North Dakota State coach Chris Klieman, the former defensive coordinator who over for Craig Bohl after last season's title. "The way it went back and forth on this kind of stage was pretty special."

North Dakota safety Christian Dudzik had five tackles in his 61st start, believed to be a first for a Division I player, to highlight a senior class that had more national titles (four) than losses (58-3 record). Appalachian State is the only other FCS team to win three straight titles.

Wentz, already the school record-holder for yards passing in a season, threw for 237 yards and a touchdown and had 87 yards rushing.

Roberson, an Indiana transfer, had 161 yards rushing and 157 passing, while Coprich added 106 yards on the ground.

Adam Keller had three field goals for North Dakota State, breaking the FCS single-season record for kickers with 145 points before his final point-after attempt was blocked to give the Redbirds a chance to win with a field goal.

Roberson reached the 44 in the final seconds, but Thorton won a tussle for the ball on a throw over the middle. The interception was held up on review.

"Time was running out," Roberson said. "I was trying to make a play and I made a dumb throw in the middle of the field. I shouldn't have made that throw."