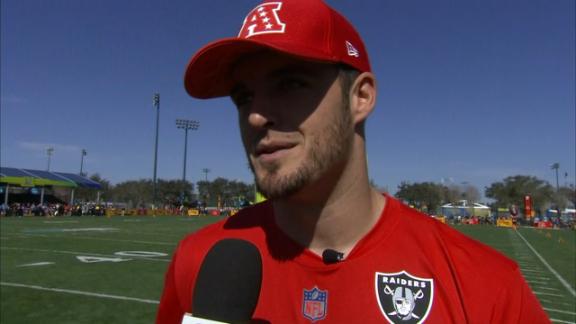 LAKE BUENA VISTA, Fla. -- Derek Carr is looking forward to not only being reunited with new Oakland Raiders coach Jon Gruden, but also being pushed by the notoriously hard-to-please quarterback guru.

Carr went through Gruden's QB Camp show on ESPN in 2014 before the Raiders drafted him out of Fresno State in the second round. Carr has played for Dennis Allen, Tony Sparano and Jack Del Rio in Oakland and he has been the Raiders' starter since his rookie season.

"Three broken bones in your back," Gruden said in his introductory media conference on Jan. 9. "I think that is a reasonable reason why you might not have the same season you had a year ago."

Carr, meanwhile, said he found out about Gruden officially replacing Del Rio on the Internet.

"Obviously it's hard to lose a coach; that's not fun for anybody because you care about him and you have a relationship with him," Carr said. "But as players, we just have to keep moving on. And now that we have coach Gruden, we're fired up, we're excited. Especially as a quarterback, to have a guy like that, his mindset. I spent time around him, I've known him for years now. We have a pre-existing relationship, so that's nice to have. I'm just really looking forward to growing under him.