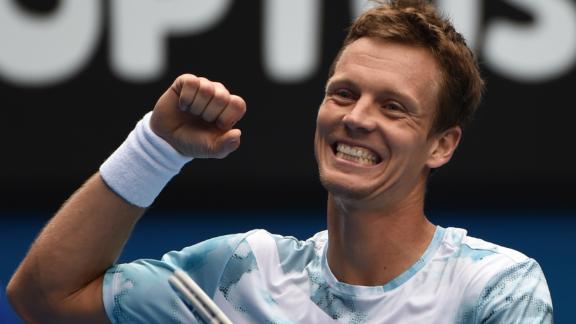 MELBOURNE, Australia -- Rafael Nadal kept telling anyone who would listen that his fitness levels wouldn't stand up to the rigors of a two-week Grand Slam tournament. Tomas Berdych proved him right.

Nadal, who had played only eight matches since last June coming into the Australian Open because of a right wrist injury and appendix surgery in early November, was knocked out in the quarterfinals 6-2, 6-0, 7-6 (5) on Tuesday by Berdych -- who had lost 17 straight matches to the Spaniard.

"It is obvious that I needed something more to be more competitive," Nadal, a 14-time major winner, said. "As I said when I arrived here, the process always is not easy. When you have injuries, comebacks are difficult. But without being at my top level of tennis, I was able to be here in quarterfinals. Is not a bad result at all for me."

Berdych, while thankful for the win, was reminded of a quote from the late Vitas Gerulaitis after beating Jimmy Connors for the first time in 16 matches: "Nobody beats Vitas Gerulaitis 17 times in a row."

So no one, not even Nadal, could beat Berdych 18 times in a row?

It was the first straight-set sweep of Nadal since 2006 at Wimbledon and only the third at a Grand Slam in his career.

"I was ready for everything and I think that was the difference," Berdych said. "I started pretty well, but when you're playing Rafa you have to keep going to the last point."

Nadal hadn't lost a 6-0 set at any tournament since 2011. He failed to convert any of his four break-point chances.

"It is obvious that I needed something more to be more competitive," Nadal said. "As I said when I arrived here, the process always is not easy. When you have injuries, comebacks are difficult. But without being at my top level of tennis, I was able to be here in quarterfinals. Is not a bad result at all for me."

Berdych showed little emotion throughout the match, maintaining a familiar focus. He said he planned to continue to play in that style.

"If this keeps me going through, I'm going to keep doing the same," Berdych said.

Nadal saved two match points in the 12th game of the final set, sending it to a tiebreaker. Berdych led 5-2 and finally ended the match on his fourth match point when Nadal netted a return of serve.

Berdych will next meet Andy Murray, who ensured there would be no five-set comeback for local hope Nick Kyrgiosas hebeat the 19-year-old Australian 6-3 7-6 (5), 6-3.

Kyrgios came back from two sets down and saved a match point in the fourth round Sunday before beating Italian Andreas Seppi, the player who had eliminated Roger Federer.

But on Tuesday at Rod Laver Arena, the excitable Kyrgios, who walked onto the court with his headphones on and gave two thumbs-up to the crowd, was undone by the sixth-seeded Murray's steady all-court game and his own string of unforced errors, silencing the parochial crowd.

"It was a tricky match," Murray said. "I tried to start as quick as possible because I know how dangerous Nick is. He's a huge hitter of the ball, so I tried to keep it out of his strike zone as much as possible. Thankfully it worked."

Kyrgios, who beat Nadal in the fourth round at Wimbledon last year, likes Murray's chances now that both Nadal and Federer are out of the Scotsman's half of the draw.

"I said to him at the net, 'This is your time, go for it.' I think he's got a really good chance of winning the whole thing," Kyrgios said.

Murray didn't face his first break point until the seventh game of the final set.

After the match, Murray delivered an impromptu and eloquent message to the Australian fans on what it's like to be the hyped young athlete in the intense glare of a national spotlight.

"The first thing I would say is try not to put too much pressure on him," Murray told the 15,000 fans packed into Rod Laver Arena during an on-court interview. "I also think that he needs to be allowed to mature and develop."

"He's going to make some mistakes obviously, he's young. Growing up in the spotlight isn't easy, and he's doing a great job so far, and he's going to continue to learn and keep getting better."

Murray became the first British man in 77 years to win Wimbledon in July 2013.

"He's incredibly talented," Murray said of Kyrgios. "To make two quarterfinals in Slams as a teenager is very rare, so he's done great and he'll continue to get better."

The heavily hyped match was front-page news in the country that has not had an Australian male champion at its own Grand Slam since 1976.

The other men's semifinalists will be determined Wednesday when top-seeded Novak Djokovic plays Milos Raonic and defending champion Stan Wawrinka takes on U.S. Open runner-up Kei Nishikori in the quarterfinals in the other half of the draw.

Information from ESPN Stats & Information and The Associated Press was used in this report.

Berdych Stuns Nadal
Tomas Berdych shocked Rafael Nadal, a man who has defeated Berdych 17-straight times, 6-2 6-0 7-6 to advance to the semifinals at the Australian Open.

Nadal: 'He Played Better Than Me'
Rafael Nadal talks about what went wrong for him during his straight-sets loss to Tomas Berdych in the quarterfinals at the Australian Open.