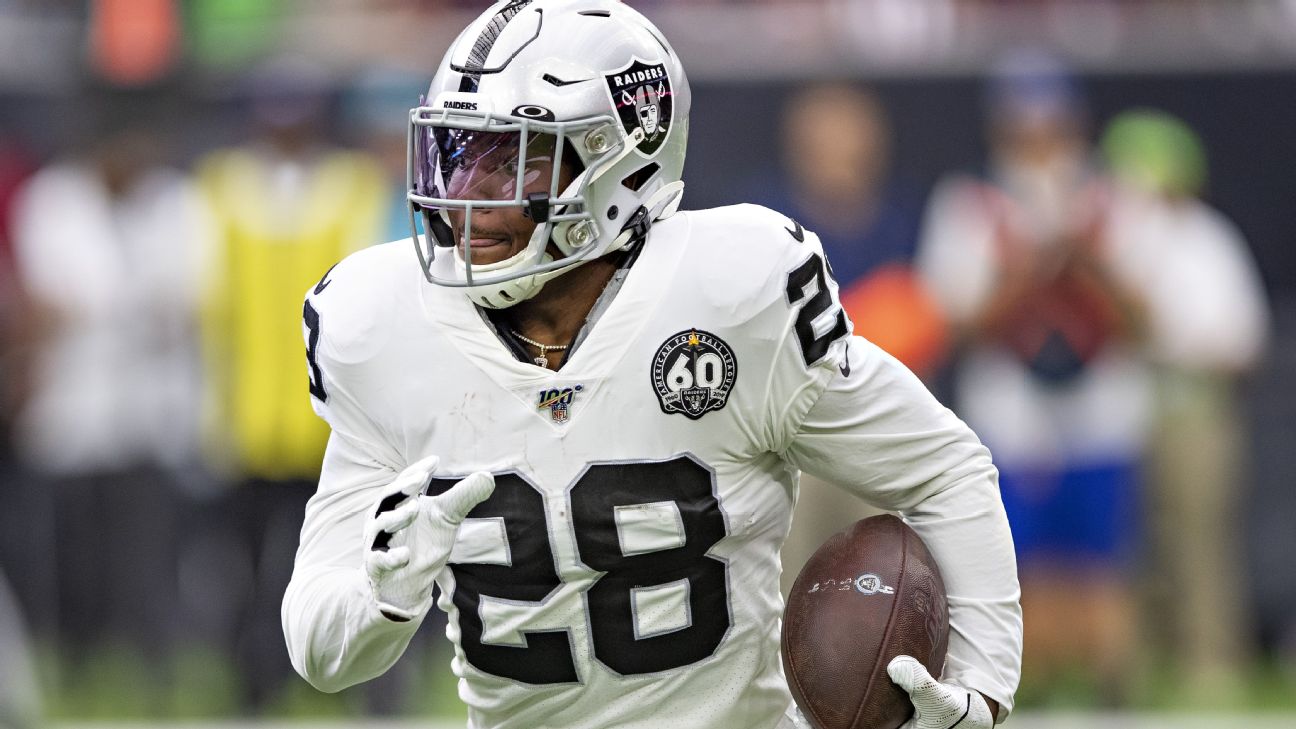 ALAMEDA, Calif. -- AlthoughOakland Raiders running back Josh Jacobs announced on social media he had undergone a "surgery" Wednesday, coach Jon Gruden said the procedure has nothing to do with the rookie's availability for a potential playoff-deciding game Sunday at the Denver Broncos.

"I don't study social media so I wasn't aware of any of his social posts," a miffed Gruden said Thursday. "But what I do know is he has a skin infection and that will have nothing to do with his playing status; his shoulder is the issue and we're anxious to see how he is [Friday].

"Unfortunately, he does have a skin infection and that, I think, will be OK, but it's the shoulder. It's been the shoulder, it is the shoulder and that's the area that we've got to take a good look at."

Jacobs initially posted about the procedure on Instagram, writing, "Surgery went great fastest surgery ever." He also posted a photo of his lower leg wrapped in bandages, but removed that post.

Later Thursday afternoon, Jacobs posted an update: "It's not a football injury, just had an infection."

And before Gruden spoke, the Raiders issued a statement: "Josh Jacobs woke up with discomfort in his leg on Wednesday and he was evaluated and treated for a superficial skin infection."

Jacobs, a leading candidate for the AFC's Offensive Rookie of the Year, ranks eighth in the NFL this season with 1,150 rushing yards despite playing in only 13 games. He has missed two of the Raiders' past three games with a fractured right shoulder. He had also announced the nature of the injury, suffered in a Week 7 loss at the Green Bay Packers, on Instagram.

Gruden was asked his opinion on players sharing medical updates on social media.

"I do have preferences, but I'll be happy to answer any questions I can," an obviously unhappy Gruden said. "I can't really comment on that."

The surgery comes ahead of the final weekend of the regular season. The Raiders are alive for the postseason, but they need a lot of help.

For the Raiders (7-8) to gain an unlikely berth into the playoffs as the AFC's No. 6 seed, they need to beat the Broncos in Denver on Sunday and have the Indianapolis Colts beat the Jacksonville Jaguars, the Tennessee Titans lose to the Houston Texans, and the Pittsburgh Steelers lose to the Baltimore Ravens.

In addition, the Raiders need a victory from one of four teams -- the New England Patriots (vs. Miami Dolphins), Chicago Bears (vs. Minnesota Vikings), Los Angeles Chargers (vs. Kansas City Chiefs) or Detroit Lions (vs. Green Bay Packers) -- to gain a strength-of-victory tiebreaker over the Steelers.

If Jacobs can't play Sunday, veteran DeAndre Washington would again be in line to start for the Raiders. Washington rushed for 85 yards on a career-high 23 carries in last weekend's win against the Chargers. He has 310 yards and three touchdowns this season.

The Raiders are hoping to regain the services of rookie cornerback Trayvon Mullen, who was taken off the field Sunday strapped to a stretcher. Mullen remains in the concussion protocol despite not having a concussion. Defensive back Lamarcus Joyner, who suffered a calf injury at the Chargers, and left guard Richie Incognito, who missed the Chargers game with an ankle injury, also might return. Receiver Tyrell Williams, who has suffered from plantar fasciitis in both feet all season, is another question mark.

"[Friday] will be a big day for the Raiders," Gruden said, "in terms of who's up and who's not."
Report a correction or typo
Related topics:
sportsespnnewsnfljosh jacobsoakland raiders
Copyright © 2021 ESPN Internet Ventures. All rights reserved.
More Videos
From CNN Newsource affiliates
TOP STORIES