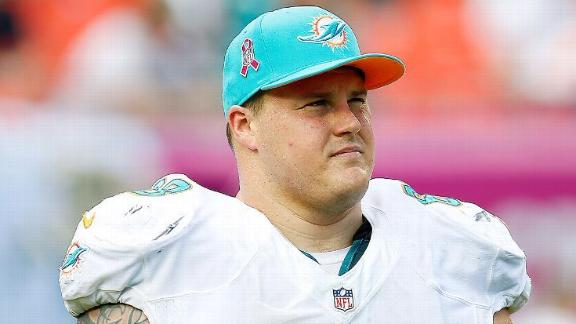 ORLANDO, Fla. -- Oakland Raiders owner Mark Davis said Monday he would "have to think about" signing former Miami Dolphins offensive lineman Richie Incognito and that he has no current plans to move the franchise out of Oakland if the team can make progress toward building a new stadium.

Davis made his comments after a morning session at the NFL's owners meetings.

Incognito, a free agent in the wake of Ted Wells' report on the Dolphins' bullying scandal, has said he hopes to return to the NFL. Two of the teams he's mentioned publicly as potential landing spots are Miami and Oakland.

Dolphins officials have said that Incognito will not return to the team.

When asked about the possibility of Incognito signing with his team, Davis said, "Ask Reggie," referring to Raiders general manager Reggie McKenzie.

Davis also was asked what his reaction would be if McKenzie or coach Dennis Allen broached with him the subject of signing Incognito.

"I'd have to think about that," Davis said.

Davis also touched on the Raiders' attempts to get a new stadium in Oakland. He had told CSNBayArea.com on Sunday that a potential return to Los Angeles if a new stadium isn't in the offing was "something that I've definitely thought about."

Davis was asked Monday whether the team's fans should be worried about a move, and he said his focus currently is getting a deal done in Oakland.

"I don't know how to answer that," Davis said initially.

When asked whether Raiders fans should be worried specifically about a move to Los Angeles, Davis repeated that his priority was keeping the team in Oakland.

"No, not at this time," he said. "We're trying to get something done in Oakland. We'll see what happens there. If Oakland doesn't happen, then we'll go from there."

The team signed a one-year extension to its stadium lease in Oakland for the 2014 season.