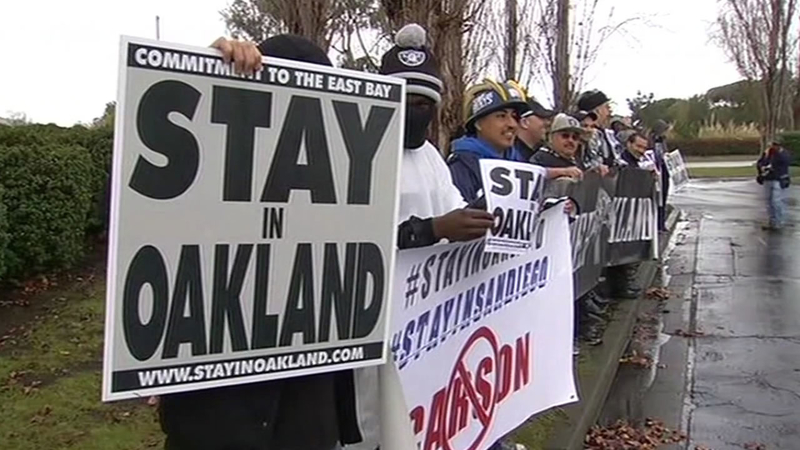 OAKLAND, Calif. (KGO) -- Could Thursday night be the last Raiders game in Oakland? The Raider Nation certainly hopes not. At O.co Coliseum where the team's last home game was played, the team's future remains uncertain.

Say it isn't so, but some among the Raider Nation are worried that this rare Christmas Eve game may be the team's last in Oakland.

the Raiders will stay here in Oakland, where we have some of the best fans in the world."

"Yes, I am worried about that. I'm a season ticket holder and I love my Raiders. I love my team and I do want them to leave," Warriors fan Aleyda Byrd said.

At Raider headquarters in Alameda, a line of demonstrators greeted arriving staff and players. They even included a few San Diego Charger fans -- another team that is making a play to move to Los Angeles.

"We want them to stay in Oakland. We want to stay in San Diego and we want to break up this relationship, this partnership between Dean Spano and Mark Davis," Chargers fan Johnny Abundez said.

As far as the Raiders are concerned, Oakland Mayor Libby Schaaf told ABC7 News by telephone, "I would say to the Raider Nation, just win baby... We're confident given time we'll get to a win for Oakland, for the NFL and for that passionate Raider Nation."

While many adults among the raider nation worry, the kids here are going to just appreciate the here and now.

A @Chargers fan amidst @RAIDERS demonstrators demanding that both teams stay right where they are.@NFL pic.twitter.com/PF56tkM48l