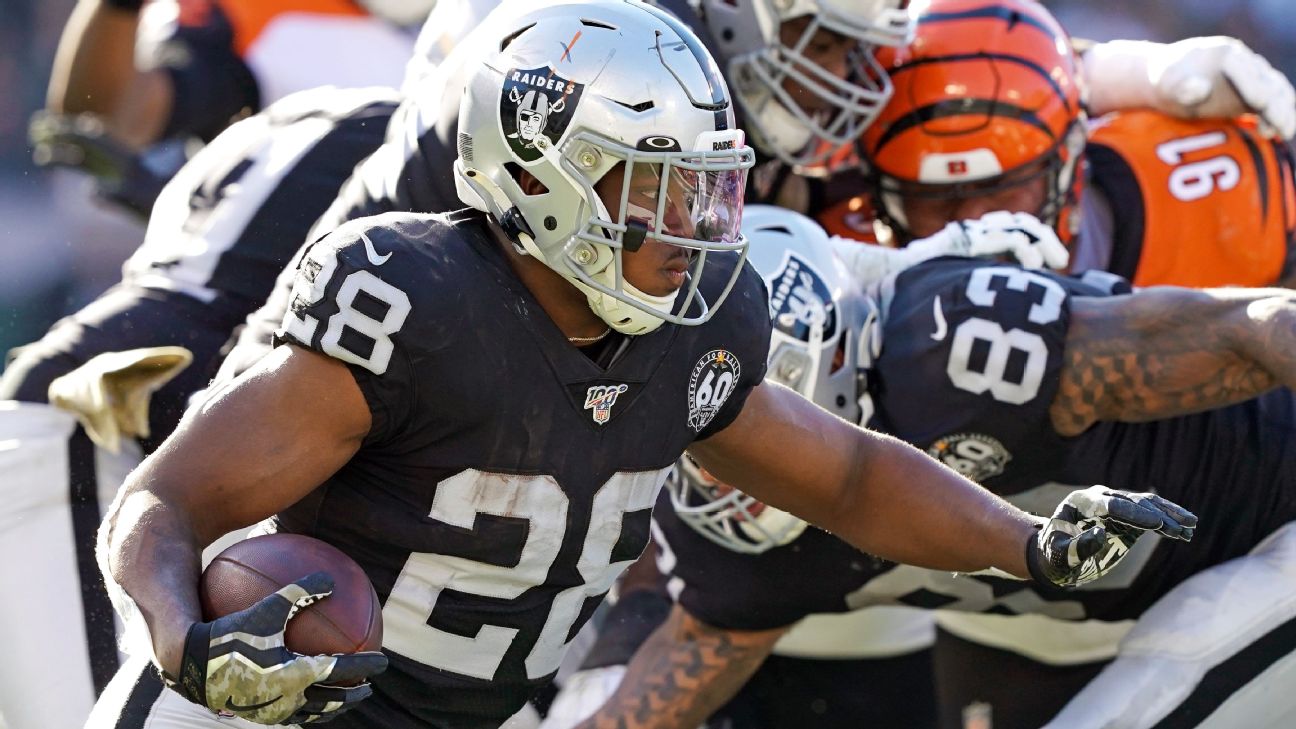 ESPN
By Paul Gutierrez
ALAMEDA, Calif. -- While Oakland Raiders rookie running back Josh Jacobs, whose 1,061 rushing yards rank fourth in the NFL, revealed on social media he has been playing with a fractured right shoulder since Week 7 -- "I just play on it," Jacobs wrote on Snapchat -- quarterback Derek Carr commended the first-round draft pick's wherewithal.

"Josh is special," Carr said Wednesday. "If Josh wasn't able to play, I would completely understand, with what he's dealing with. But the fact that he keeps suiting up and going out there and not only running, but running with the style that he runs with, I don't think enough can be said about that guy."

Jacobs initially injured his shoulder doling out a hit against the Green Bay Packersat Lambeau Field on Oct. 20 and left the game before taking what Raiders coach Jon Gruden described as a pain-killing injection and returning. Jacobs has not missed a game, though his workload has been watched closely and managed.

"He's tough, man, he's tough," Gruden said Wednesday. "He is a tough guy. He is a great kid, and he's smart. He is a great competitor. Those are the things that people don't see; maybe they feel it. But he is off the charts when it comes to being on the mark, in terms of his assignments, and he has a lot of pride in his performance.

"He's the perfect centerpiece for our offense."

Gruden would not comment on the extent of Jacobs' injury, saying only that Jacobs has been playing through "a lot" since the hit in Green Bay. And although Jacobs sat out of practice Wednesday, he is not expected to miss the Raiders' home game Sunday against the Tennessee Titans.

Jacobs, taken with the No. 24 overall selection in April's NFL draft with a pick acquired from the Chicago Bears for edge rusher Khalil Mack, briefly entered the Raiders' locker room Wednesday with his right shoulder taped. He did not stick around for questions.

After Sunday's 40-9 loss at Kansas City, in which he rushed for 104 yards, Jacobs lamented the Raiders' second consecutive blowout loss.

"We have a really good team, and we know that we're not necessarily showcasing it right now," he said at the time. "That's the biggest thing that's frustrating me. But the thing that I liked this week that was better than last week was nobody gave up, so that was huge for us.

"Last week, I feel like people gave up in the game [at the New York Jets]. The biggest thing this game, I don't feel like nobody gave up in this game. Of course, I'm disappointed in the loss, but I'm not frustrated, if that makes sense."
Report a correction or typo
Related topics:
sportsespnnewsnfljosh jacobsoakland raiders
Copyright © 2020 ESPN Internet Ventures. All rights reserved.
More Videos
From CNN Newsource affiliates
TOP STORIES