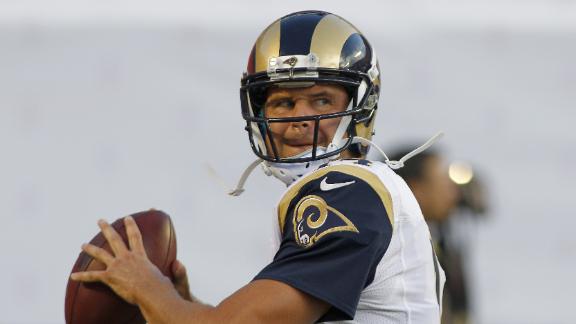 "It's never an easy decision when you have to change in the middle part of the season," Fisher said. "We looked at things Monday night, had a lengthy discussion with the offensive staff and just felt that the best thing to do at this point moving forward is to lean on the experience."

Fisher and the offensive staff began thinking about the move Monday night but settled into the decision on Tuesday. Fisher said he found Davis in the quarterback meeting room late Tuesday night and informed him of the decision to make the switch.

"After everybody else left the building, I found Austin in the quarterback room last night preparing for this game," Fisher said. "So we had a great visit. He understands. He talked about the respect factor that he has for those guys that are playing this game really well week after week after week because of how hard that position is to play. He's in a good place. He's going to prepare just like he has to backup Shaun."

Fisher called Hill after speaking with Davis and informed the team of the change at a team meeting Wednesday morning, citing Hill's experience as the Rams prepare for Sunday's game against the Denver Broncos.

On Monday, Fisher had said Davis would continue to be the starter but finished that confirmation with "so we'll see where it goes."

Davis' status became tenuous after he threw two fourth-quarter interceptions and fumbled during this past weekend's 31-14 loss to the Arizona Cardinals.

"Basically, I don't really have time to feel sorry for myself," Davis said. "We play Denver on Sunday and you're still one play away. It's a different role, a different position. Hopefully what I've done has earned some respect in this locker room. I'm going to continue to be the same guy, it's just a different role."

Hill gets a second chance after a calf injury suffered in the first half of the season opener allowed Davis to seize the job. Hill was the team's original starter after Sam Bradford was lost to a torn ACL for the second consecutive season in the team's third preseason game.

In his one half of action this season, Hill was 8-of-13 for 81 yards with an interception.

Now in his 14th NFL season, Hill said he's not surprised by much of anything anymore while acknowledging that he's looking forward to another opportunity.