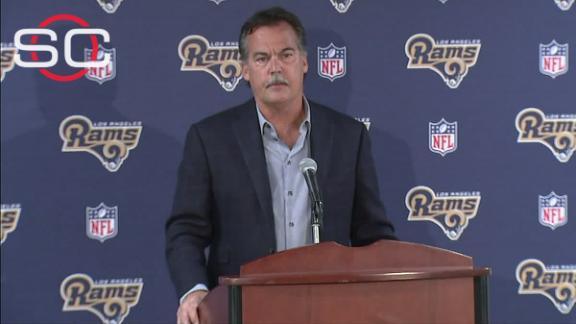 The Ramscoach admitted he called Dickerson on Nov. 17 to let him know he could not be expecting favors from the team -- such as sideline passes -- if he was going to continue to be critical of the organization. But Fisher described the conversation as "really positive," a stark contrast from the detailed portrayal Dickerson relayed to several media outlets, including ESPN, on Monday.

Dickerson, who remains a die-hard Rams fan, vowed never to come to a game as long as Fisher is the coach.

Asked about those comments after Tuesday's practice, Fisher basically summed up his point of contention with Dickerson as follows: "He's totally entitled to his opinion, and he has every right to be critical. As I told him in the conversation, you can't have it both ways. You can't be critical, and then come back and ask for this and ask for that. That's just common sense. And we got it resolved. Again, based on that last conversation I had with him and the text, it was resolved."

Dickerson surprised the organization by saying on his Monday radio show on AM 570 in Los Angeles that someone from "upper management" told him he was not welcome on the sidelines. That prompted Fisher and Rams COO Kevin Demoff to go on the defensive, stating that they did not know where Dickerson got that impression and saying emphatically that they would welcome him with open arms.

That prompted Dickerson to reveal that it was Fisher who called him, a response to the former running back's request for sideline passes at the Rams' groundbreaking ceremony in Inglewood, California. The Hall of Famer said he doesn't "feel welcomed" by the Rams and questioned the sincerity of the conciliatory comments made by Demoff and Fisher.

Fisher believed the two were on good terms based on the text message Dickerson sent him after they had hung up 12 days ago. It read, according to Fisher: Thanks for the conversation. Best of luck. Have a good night. Go Rams.

Dickerson, 56, played for the Rams from 1983 to 1987 and rushed for 7,245 yards in 65 games. He felt wronged when the Rams traded him to the Indianapolis Colts midway through the 1987 season, but he remained a fan of the organization upon retirement. Dickerson hosted the rookies at his house in the offseason, was part of the broadcast team during the preseason and attended the groundbreaking ceremony along with a handful of other luminaries.

But he hasn't minced words about the Rams, who are now 4-7 and coming off a 49-21 dismantling at the hands of the New Orleans Saints. Dickerson has harshly criticized the offensive line, talked openly about how boring the offense can be, thrown shots at Fisher's coaching acumen and even questioned the credentials of quarterbacks coach Chris Weinke, who he doesn't believe has earned the right to coach a No. 1 overall pick in Jared Goff.

"It hasn't been a great season to cover," Rams punter Johnny Hekker admitted. "There hasn't been a ton of positive things to really just gab about. I understand that he's entitled to an opinion. As an organization, they can choose to treat those situations however they want to do it. But as a player, we have bigger things to focus on than those disputes. We're a 4-7 team. We have to get better."

Dickerson's comments were one of the top stories throughout the day, but Fisher caught only some of the noise.

He was too busy preparing for a road game against the 9-2 Patriots.

Fisher said the controversy is not a distraction to his team.

"They're focused, they're ready, and they understand the challenge," he said. "It's not a distraction. This is the most I've talked about it all day long. I've been working all day."

"It doesn't affect us," Rams safety T.J. McDonald added. "All the outside noise, from this locker room, we're not hearing what anybody else is saying. We know what we have to work on, and that's what we're focused on."

Fisher said he "opened everything to Eric" during that fateful conversation because "I wanted him to know that we would provide anything for him that he needed." According to Dickerson, though, Fisher told him he cannot be on the sidelines because his criticism of the team made players "uncomfortable," and then when Dickerson defended his right to speak out, Fisher backtracked and told him he wants him around.

Fisher offered nothing but praise on Tuesday.

"He's a Hall of Famer," Fisher said. "I have great respect for his career and his jacket."

Fisher would love to have Dickerson around the team
Rams coach Jeff Fisher denies any speculation that he does not want Eric Dickerson on the sidelines, saying that he recently had a great conversation with him and he welcomes any alumni that want to be a part of the organization.
Related topics:
sportsespnnfllos angeles ramseric dickersonjeff fisher
Copyright © 2020 ESPN Internet Ventures. All rights reserved.
More Videos
From CNN Newsource affiliates
TOP STORIES