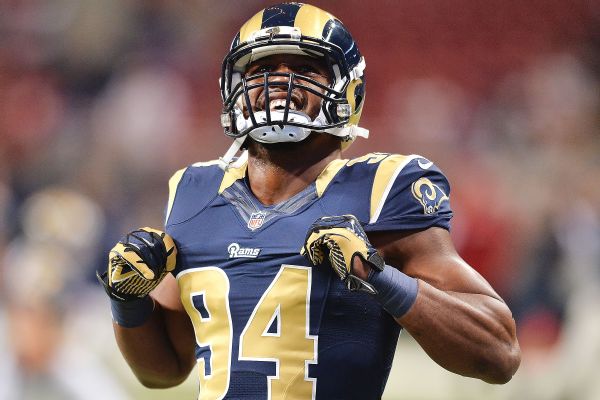 Fisher wouldn't go into details regarding Quinn's medical condition but said it's "highly unlikely" that it is related to the benign brain tumor he was diagnosed with in high school.

Quinn took 83 percent of the defensive snaps in Sunday's 9-6 win over the New York Jets, an uncommonly high number that was partly caused by fellow defensive end Eugene Sims' going through the concussion protocol. Quinn later did interviews with the media, but he admitted himself to a hospital shortly after the team returned to the West Coast late Sunday.

Fisher spoke with Quinn and his wife, Christina, on Monday.

"He's feeling much better," Fisher said during his weekly media availability from the team facility late in the afternoon. "He kept saying to me over and over, 'Coach, I just want to get back, get my mind right and get back on the field as fast as I can.' We're still undergoing tests. Things look encouraging."

Quinn, the 14th overall pick out of North Carolina in 2011, racked up 40 sacks from 2012 to 2014, third-most in the NFL. He was limited to eight games in 2015 after undergoing back surgery and has played in seven of the Rams' nine games this year, with two sacks, two forced fumbles and two pass deflections.

When he was a teenager, Quinn's brain tumor caused severe headaches and prompted doctors to drain excess fluid from his skull.Now 26, Quinn still goes to biannual checkups. But his two missed games this season were merely a product of shoulder and neck injuries.

Fisher said Quinn hasn't had any prior episodes and would not rule Quinn or Sims out for Sunday's home game against the Miami Dolphins, winners of four straight.

"He was fine after the game," Fisher said of Quinn. "As a matter of fact, he sits behind me on the bus. We had the long bus ride back from the airport, and I was actually sharing some thoughts on the game and watching some plays from the game with him."