Rangers' Adrian Beltre ruled out of Game 2 with back strain 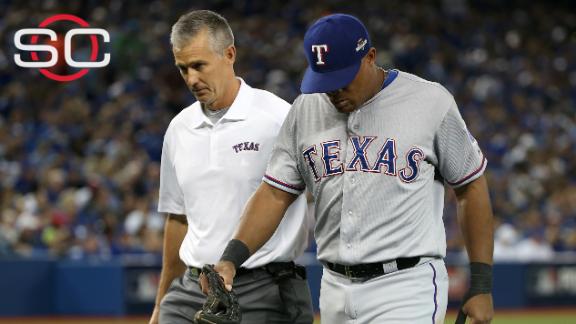 Texas Rangers third baseman Adrian Beltre is not in the lineup for Friday's Game 2 of the AL Division Series after suffering a back strain during the series opener.

Beltre was hurt sliding into second base as Prince Fielder hit into an inning-ending double play in the first inning of Thursday's 5-3 win over the Toronto Blue Jays.

Beltre hit .287 with 18 homers and 87 RBIs this season. His two-out single in the third gave the Rangers a 2-0 lead over David Price and the Blue Jays.

Hanser Alberto, who replaced Beltre in Game 1, gets the nod at third base and is hitting ninth. Alberto, who went hitless in two at-bats Thursday, batted .222 with no home runs in 41 games in the majors this season.

The Blue Jays have Josh Donaldson and Jose Bautista in the lineup after both left Game 1 with injuries.

Donaldson, attempting to break up a double play on a ground ball by Bautista with runners on first and second in the fourth, popped up in his slide and caught a knee to the side of the head from Rangers second baseman Rougned Odor.

Donaldson, a favorite to win AL MVP honors after batting .297 with 41 homers and 123 RBIs, later passed all tests for a concussion.

Bautista, who homered in the sixth inning of the opener, came out of the game with what was described as a mild cramp in his right hamstring in the ninth inning.

How much will Rangers miss Adrian Beltre?
Tim Kurkjian and Dallas Braden believe Adrian Beltre must be really be hurting if he is sitting out Game 2.