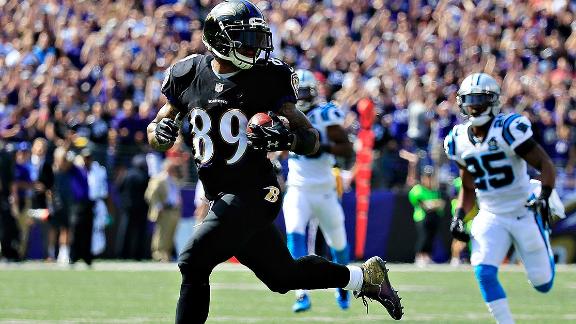 "At the end of the day, what's on my Twitter feed and what's going on with the world, I don't think that should be on the same level," Smith said.

Smith was one of the more active Ravens on Twitter, posting 899 times. His account, @89SteveSmith, has 92,500 followers.

If you want to know what's going with me follow @SteveSmithFDN and check out what we are doing. it's been real! Deuces done with tweeter!

- Steve Smith Sr (@89SteveSmith) October 6, 2014Smith won't shut down the account because he'll continue to use it for marketing purposes.

Smith isn't the only Ravens player to quit Twitter recently. Wide receiver Torrey Smith joined him in deleting the Twitter app from his phone because of the negative comments he got from fantasy football fans.

Steve Smith acknowledged that criticism was a major reason why he decided to stop using his social media account.

"I'd kill you on Twitter, so I had to stop," he said. "Somebody said something inappropriate to me, my wife said I wasn't being a very good example for my kids."

Smith understands people are going to say what they want. He has just chosen to ignore them now.

"Internet courage is like a Cover 2 corner," Smith said. "When you got safety over the top, you feel better about yourself."