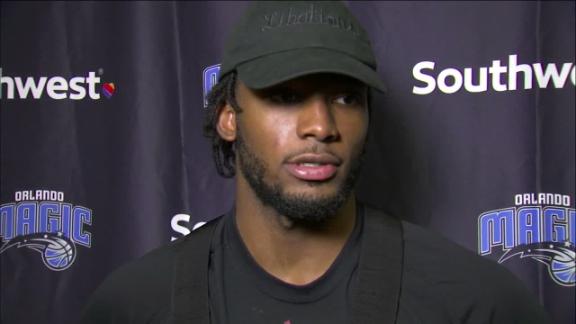 "I still don't think I'm over it," Winslow said after the Heat's Orlando Summer League game against the Detroit Pistons on Thursday night.

Winslow, like so many Miami Heat fans around the world, is trying to come to grips with the fact Wade will be playing with the Chicago Bulls next season after agreeing to a two-year deal on Wednesday night.

"It's just one of those things where, it's not even so much about me stepping up or me taking on a bigger role or losing Dwyane, it's just the fact that it's not too often you get one of the greatest of all time on your team," Winslow said. "And I'm sure guys in L.A. feel the same about Kobe [Bryant].

"Different guys changing teams, guys in Oklahoma City, it's not too often you play with one of the greats," Winslow added. "I just think that's one of the parts that kind of shook me the most. Losing that mentor, that friend, but I think I'll get over it soon."

Winslow isn't alone in trying to get over the disappointment Wade's decision created in Miami. Wade's former teammate Juwan Howard acknowledged being "surprised" by Wade's choice.

"I was surprised just like I'm sure Heat Nation was," said Howard, who coaches the Heat summer league team. "But I wish him well. He's a family member. He did an excellent job not only for the organization, but also for the community in Miami. He will be missed."

"It's tough," Richardson said. "But I'm grateful for the year that we had. He was a great leader, a great mentor for us, so I think he gave us a lot to learn. We'll definitely keep a relationship in the future because it's bigger than basketball."

After playing 13 years in the same city, Howard said he understands how much of a void Wade's decision has created.

"Dwyane has had a huge impact on the organization," Howard said. "He's helped us win three NBA titles and that right there says a lot. I'm sure that he's happy about his 13 years with Miami, and I know we are very happy [about them] and we're going to miss him."