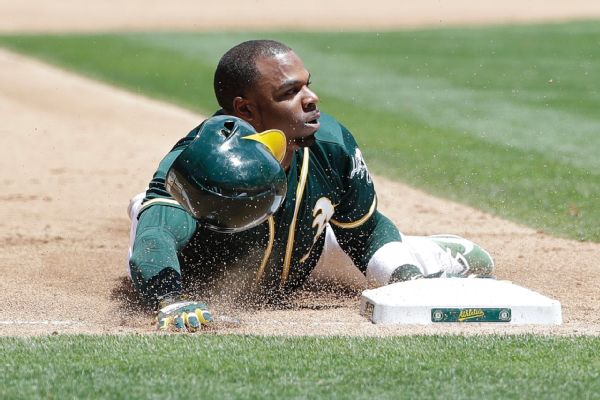 It didn't take long for the Boston Red Sox to deepen their outfield after an injury claimed one of their regulars.

But Davis is known primarily for his speed and base-stealing ability. He has swiped 26 bases in 32 attempts this season and has 391 career steals. And even if Bradley hadn't injured his thumb on a slide into home plate Tuesday night, the Red Sox were interested in picking up Davis before Sept. 1 as a pinch runner down the stretch and possibly in the playoffs.

"It's important for a club that has a chance, you want to add every little dimension you can, but it's not always easy," Red Sox president of baseball operations Dave Dombrowski told reporters during Wednesday night's 6-1 win in Cleveland. "It's a situation to have that type of person that you can put on first base and they can steal a big base at a time when other people know they're going to steal. It's a nice situation to have."

The Red Sox have prioritized exactly such a player for most of the past decade. In 2013, they added speedy outfielder Quintin Berry in late August. In 2009 and 2011, Joey Gathright was the late-season addition as a stolen-base threat. And, of course, Dave Roberts stole the most famous base in Red Sox history in the 2004 American League Championship Series.

Bradley returned to Boston on Wednesday and underwent an MRI exam that revealed a sprained ligament, but not a tear, on the outside of his thumb. His thumb will be immobilized in a splint for five to seven days, according to manager John Farrell, after which he will begin range-of-motion and strengthening exercises.

The Red Sox don't have a timetable for when Bradley might return, but it will be longer than the minimum 10-day stint on the DL. By acquiring Davis, the Red Sox might buy more time to make sure Bradley is completely healthy upon his return.

Davis, a right-handed hitter, has played both center field and left. Initially, the Red Sox planned on moving left fielder Andrew Benintendi to center and having Chris Young and Brock Holt split time in left field. Davis will figure into that mix, possibly taking at-bats from Young, who is batting only .205 this season against left-handed pitchers. Davis is batting .255 against lefties.

Davis, who is expected to join the team for Thursday's game, had a memorable postseason moment last year with a game-tying two-run homer off then-Chicago Cubs closer Aroldis Chapman in the eighth inning of Game 7 of the World Series.

But the Red Sox were familiar with Davis long before that. He played for Dombrowski with the Detroit Tigers in 2014-15 and for Farrell with the Toronto Blue Jays in 2011-12. Dombrowski characterized Davis as a "tremendous individual."