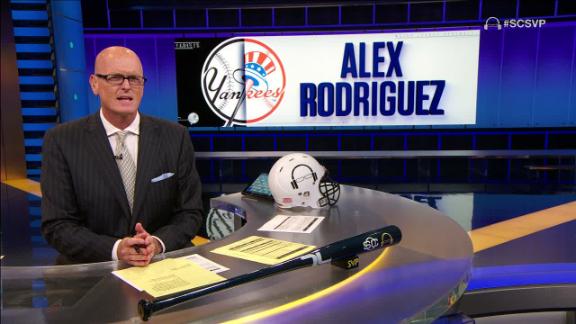 BOSTON -- If Alex Rodriguez is expecting a grand send-off at Fenway Park, he shouldn't hold his breath.

Although the Boston Red Sox likely will make a low-key acknowledgment of A-Rod's prominent role in the age-old rivalry with the New York Yankees at some point during this week's three-game series, a source said the club isn't planning a farewell ceremony along the lines of those received by Yankees greats Mariano Rivera in 2013 and Derek Jeter in 2014 or by Red Sox icon David Ortiz at ballparks across the majors this season.

Rodriguez announced Sunday that he intends to play his final game Friday night at Yankee Stadium. That means his last road games will be at Fenway Park, where the Red Sox and Yankees will open a series Tuesday night.

As with most things involving Rodriguez, his history with the Red Sox is complicated. He made his major-league debut at Fenway on July 8, 1994, for the Seattle Mariners. He nearly was traded to Boston in December 2003 -- the Sox agreeing to send Manny Ramirez and then-pitching prospect Jon Lester to the Texas Rangers -- but the players' union nixed the deal over what reportedly would have been an unprecedented $28 million reduction in Rodriguez's salary.

Rodriguez instead wound up in the Bronx and instantly became a Boston villain. He took a mitt to the mug from then-Red Sox catcher Jason Varitek during a midseason brawl in 2004 and infamously slapped the ball out of pitcher Bronson Arroyo's glove to avoid a tag in Game 6 of the 2004 AL Championship Series.

In 2013, after announcing he would appeal a 211-game drug suspension, Rodriguez got plunked by Red Sox pitcher Ryan Dempster, then responded by hitting a home run.