Returning Dwyane Wade: Heat 'going to be better' next season 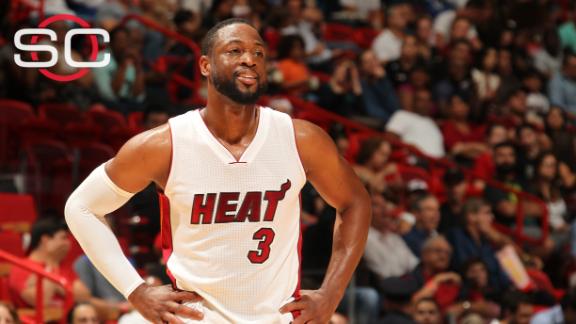 ESPN
MIAMI -- After 12 years with the Miami Heat, Dwyane Wade needed a reminder of how much the franchise valued him.

Once he found out, any chance of him leaving vanished.

Wade accepted a one-year, $20 million deal Thursday to stay with the Heat next season, ending his latest foray into free agency and wrapping up a weeks-long saga that had him seriously wondering about leaving Miami for the first time.

A pair of conversations, first with Heat CEO Nick Arison and then with managing general partner Micky Arison, reminded Wade of what he meant to the team. From there it was a matter of making numbers work.

"Sitting down with Nick, sitting down with Micky and having conversations with them that I've never had, that was big for me," Wade told The Associated Press. "I've never had a business conversation with one of them. ... They got to show me how much they really wanted me to be here, how important it was for them that I continue to wear one jersey."

Without those conversations, Wade said, "I don't think we would be at this point."

Per NBA rules, the Heat could not comment other than saying that they intend to enter into a contract with Wade once the NBA moratorium period ends. Wade cannot sign his new deal until July 9.

Wade said he was able to track through social media how much Heat fans wanted him to stay, which he said factored heavily into his decision-making.

"I can't tell you how much I appreciated what they all said," Wade said.

But ultimately, Wade needed to know the Heat felt the same way about their 33-year-old shooting guard. Wade averaged 21.5 points last season, third-best among Eastern Conference players, and believes he remains one of the game's top threats when healthy.

He found out the Heat still agree.

"Money-wise, I thought I did the best I could for myself and my family, and I also had the Heat in mind," Wade said. "Obviously it's all about putting yourself in position to be able to compete. I love this organization. It crossed my mind to say, 'If I'm going to handicap this organization by this contract, maybe the best situation is not to be there.'

"A one-year deal for $20 million, I could never look at that and roll my eyes," Wade added. "I am from Robbins, Illinois. Look at what I've been through in my life."

Wade could have made $16.1 million this season on the second year of a two-year deal, but he opted out with hopes of getting a longer, more-lucrative contract.

For now, the more-lucrative part was enough to appease Miami's all-time leading scorer.

"You go through so many emotions," Wade said. "It's no secret that my goal was to sign a longer-term deal this summer. That's what I was focused on. Once I realized that probably wasn't the best thing for me right now, where everything is financially with the NBA and a lot of things coming up that we don't even know about yet, a one-year deal isn't a bad thing."

Wade posted about his return on Instagram on Thursday.

The decision ends a sometimes-contentious standoff between the Heat and their franchise player. Wade and the Heat had been at odds over the potential terms of a new deal, with the 11-time All-Star believed to be seeking a three-year contract worth between $45-50 million. Wade was open to the idea of leaving Miami over a contract dispute, more so than ever before.

With talk of an impasse between the sides several weeks before free agency began, social media analysis of Wade speaking of Miami in the past tense in his role as a television analyst during the NBA Finals and even the widespread perception that a recent image of his father wearing a Cleveland Cavaliers shirt was a sign of a looming Heat departure, it seemed like a most tenuous time.

Wade's age and recent injury history -- missing 48 games the past two seasons -- were major areas of concern while assessing his long-term value at this stage of his career.

But Heat president Pat Riley wanted no part of seeing Wade bolt for another team, especially after enduring LeBron James' brutal and abrupt departure in free agency last summer to return to Cleveland. But Riley was also adamant about keeping Wade in the fold while maintaining salary-cap flexibility moving forward to make another bold splash in 2016 free agency, whenKevin Durant is likely to highlight a deep group of available stars on the market.

All the angst was for naught.

Wade considered other teams -- the Los Angeles Lakers, in particular -- but the lure of staying home was ultimately too strong.

"This contract is a win-win for both Dwyane and the Heat," said Henry Thomas, Wade's agent. "Not only does Dwyane get to extend his Hall of Fame-worthy career with the only franchise for whom he has ever played, but he will have the flexibility next summer to sign an additional deal.

"And the Heat gets to keep their franchise cornerstone while having the ability to build a championship-contending roster."

Goran Dragiccommitted to a five-year deal Wednesday, and with Wade back, the Heat free agents have decided their futures. Now Miami will look to add pieces. Riley was to meet late Thursday with free-agent forward LaMarcus Aldridge in Los Angeles, a long-shot quest but one that shows that Miami is serious about winning now.

A 37-45 season, one where Wade missed 20 games and Chris Bosh missed half the season because of a blood clot on his lung, is going to go down as an aberration, the Heat hope.

"We're going to be better. I know that," Wade said. "Knock on wood, you stay healthy, I think we're a good team. I like our chances."

The Associated Press and ESPN.com's Michael Wallace contributed to this report.

What convinced Dwyane Wade to stay in Miami?
Chris Broussard details how Dwyane Wade and the Heat were able to come to terms on a one-year contract.