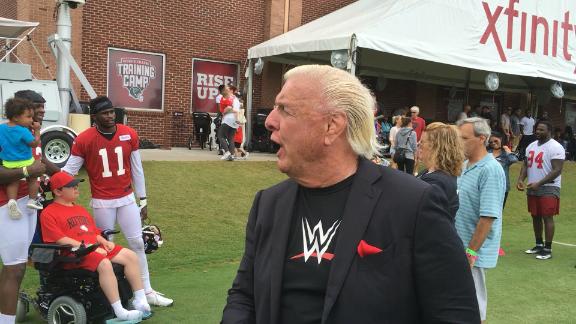 The "Nature Boy," a guest of Jones, addressed the Falcons following practice, firing up the entire squad with his trademark "Wooooooo!'' before breaking the huddle.

Afterward, Flair shared a special message about Jones with ESPN and called out Norman, the former Carolina Panthers cornerback who will suit up for the Redskins against the Falcons on Thursday night.

"This is the 'Nature Boy' Ric Flair at Falcons training camp with my main man, my brother, Julio Jones, the greatest wide receiver in the NFL,'' Flair screamed. "That's right, Josh Norman: The best. Nobody catches up to Julio Jones. Wooooooo! Go Falcons.''

Flair, who used to live in Charlotte but now resides in the Atlanta area, expanded on his thoughts about the Falcons.

"I met Julio at Lake Lanier, and my family has been big Falcons fans,'' Flair said. "I am a Falcon fan now. It's easy to say you're a fan of Tom Brady and the Patriots. But now, I want someone in this conference (NFC South) to step up, and this could be Atlanta's year. The Panthers gave up a lot on defense. I think (the Falcons) can do it, if everyone stays healthy.

"I think Julio is one of the most wonderful, most polite, most articulate guys I've ever met. From texting and talking and just being so kind to people. He doesn't have to be, but he's such a quality guy. He's first class.''

Flair expressed an equal amount of respect for coach Dan Quinn after meeting the Falcons' coach for the first time Tuesday. The respect is mutual.

"You could see the energy,'' Quinn said of Flair. "(He) was talking with us and having some fun. So it was great to have his support and being a part of it for us today. You could tell he's a big fan, and we're also a big fan of his.''