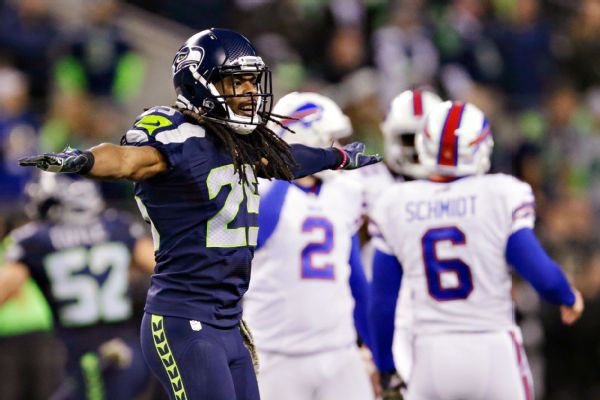 "It's not surprising at all," Sherman said Wednesday. "This is a day and age, you've got the Ku Klux Klan running around. People say whatever they want, and there's very little consequence. For her to say something like that and then have a B.S. apology like she did, it's just the way of the world. I don't let it bother me. It's something I'm very used to. It's just the way people are, the way people were raised."

Kaela Carpenter tweeted Monday night that Sherman should be castratedfor a hit on her husband during a field goal attempt. Sherman's reaction on Twitter on Tuesday morning seemed to laugh it off.

On Wednesday morning, Kaela Carpenter issued an apology via Twitter:

"It's more disappointing than anything," Sherman said Wednesday. "But it's also something that's understandable. Ignorance has always been in this world. The core of this country has been built off of slavery and people owning people. So any time you understand that's the core principles of the way the nation is built, then you've got to have some kind of sympathy for it."

Sherman, who has two children, was asked if he has to shield his family from any of the comments he gets on social media.

"My son's too young to understand it, but I don't shield myself from it," Sherman said. "I'm sure if she came up, trying to execute the actions that she said she would, I'm sure my family would have something to say about that."

As for the actual play, Sherman was called offside, but Dean Blandino, the NFL's senior vice president of officiating, said he should have been flagged for unnecessary roughness.

Sherman maintains that the whistle did not blow after he jumped offside, and replays show he got his hand on the football while colliding with Carpenter.

"There was no whistle," Sherman said. "So the league goes back and hindsights everything and says this and says that because they want to appease the fans, but I know the rulebook, and I know exactly what I was doing on the play.

"It's very similar to a free play for all the uninformed people out there. If you watch Aaron Rodgers or any team, they draw a team offside, and if a guy comes scot-free at the quarterback and he's about to get hit in the face, the refs will usually blow it dead then so the quarterback doesn't get hit. But if a guy's not coming scot-free, they'll let the play go on, and a lot of teams score touchdowns like that. They were doing the same thing. If the kick would have gone through, they would have said good kick, declined the penalty, field goal good. They've got three points. But they didn't blow the ball dead until he kicked it, so that is what it is."