Richard Sherman steadfast in hindsight: 'I went for the ball' 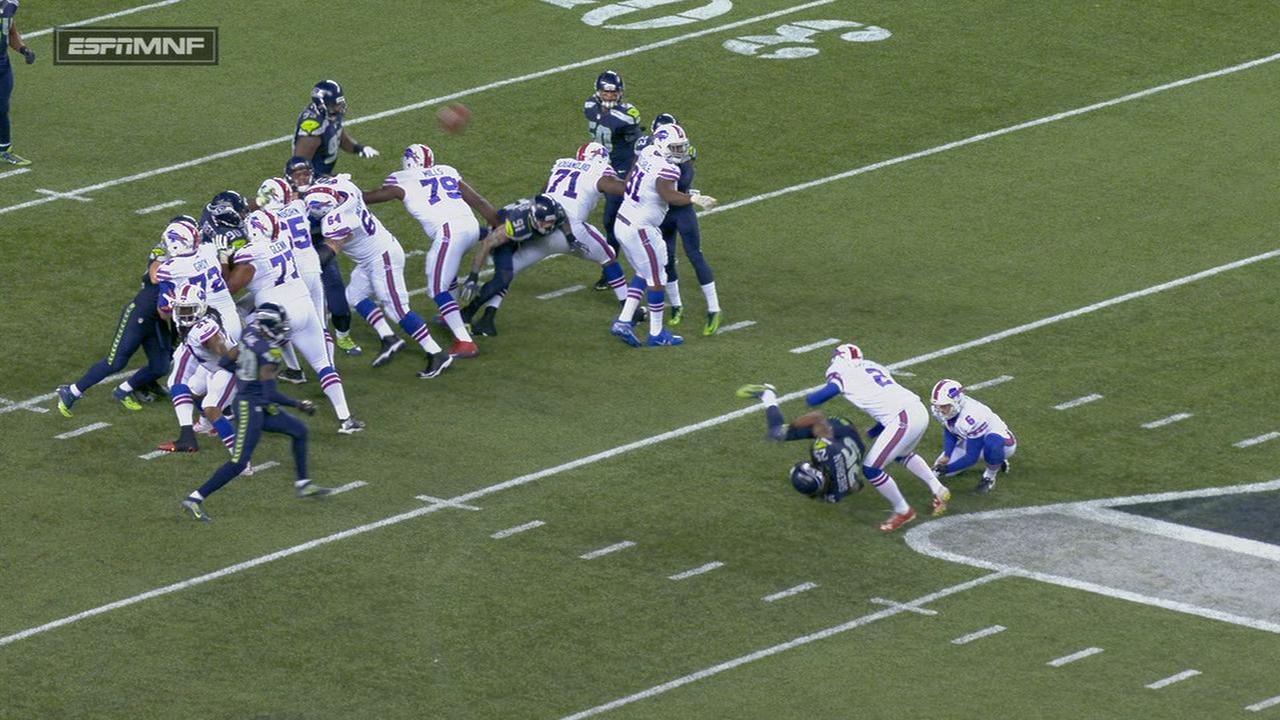 SEATTLE -- The NFL will review the performance of referee Walt Anderson and his officiating crew after a bizarre first-half sequence from theSeattle Seahawks' 31-25 win Monday night against theBuffalo Billsthat led to hand-wringing and finger-pointing from all sides.

The controversy, which initially began over whether Seahawks cornerback Richard Sherman should have been penalized for unnecessary roughness against Bills kicker Dan Carpenter, led to several minutes of confusion and eventually a missed 54-yard field goal by Carpenter at the end of the first half.

NFL senior vice president of officiating Dean Blandino, who confirmed that Sherman should have been penalized for unnecessary roughness for his hit on Carpenter, will look into the matter, per normal protocol. A league source told ESPN NFL Insider Ed Werder that discipline for egregious mistakes by Anderson and his crew is a possibility.

The sequence also upset coach Rex Ryan and Bills players after the game.

"Ridiculous," Ryan said after the game. "Absolutely ridiculous. [Officials' explanation] doesn't matter [because] it was wrong. It's clear what happened: The guy roughed our kicker. Jumps offside and roughs our kicker."

Carpenter, initially attempting a 53-yard field goal with 3 seconds remaining in the half, appeared to be injured when Sherman went offside and fell into Carpenter's legs. The play was blown dead because of Sherman's penalty. Sherman also appeared to get away with an unnecessary roughness penalty that wasn't called by Anderson's officiating crew.

Anderson defended his decision after the game.

"I didn't feel like the actions and the contact, because we were shutting the play down, warranted a foul," he told a pool reporter after the game, adding that the stadium was "loud" and that Sherman might not have known officials had blown the play dead.

"One of the things we're just looking for is, does the player have a chance to realize that we're shutting the play down from that standpoint," Anderson said, "and whether or not he has an opportunity to avoid any type of contact once he realizes that we're getting the play shut down."

Bills trainers ran onto the field to tend to Carpenter, who remained on the ground after being hit by Sherman. Because trainers entered the field of play, Carpenter was required to exit the game, leaving the Bills without a kicker for the end-of-half attempt.

Sherman said he completely disagreed with Blandino's assessment that Anderson's crew did not make the correct call, saying "I didn't go for the kicker, I went straight for the ball."

"[Carpenter] should have not kicked it, you know?" he told ESPN's Lisa Salters after the game. "Maybe he wanted to; I went for the ball. So when the ball gets tipped on a play, the rule is, there is no flag."

Sherman disputed that the play was "dirty," telling reporters after the game, "I'm a pro. I've been in this league long enough. I know how hard it is to play. When you go for a block, that's what you do. You go for a block. Even if I was offsides, you still stop the play. You're not going to let him just kick the ball freely and let him have a free play. He could have made the decision not to kick the ball. He saw the flag before I did. He has a better vantage point than any of us."

During the confusion over the penalty and ruling about Carpenter, players on both benches began to run toward the locker room for halftime. As that happened, Ryan and his brother, Bills assistant head coach/defense Rob Ryan, appeared to exchange words with Sherman.

"He's mean mugging like he's doing and whatever," Rex Ryan said of Sherman after the game. "The guy's a great player. I guess it wasn't as bad as I thought. I thought he roughed our kicker. It was a ridiculous play, no question. Then he's over on the sideline, taunting us. So I had some words. I think I said, 'You're too good of a player to act like an ass.' I think that's what I said."

Asked after the game about the exchange with the Ryan brothers, Sherman said the stadium was too loud to hear what Rex was saying and that Rob was "talking to himself."

Added Sherman about Rex: "I didn't say anything. I just looked at him. He's one of those coaches that likes to talk. It's fun to see what he has to say."

Officials then had to clear the field before the Bills, with rookie running back Jonathan Williams under center, had to spike the ball to stop the clock.

With one second remaining on the clock, the Bills lined up for a 49-yard attempt but were called for delay of game after the play clock expired. On their ensuing 54-yard attempt, Carpenter missed wide right.

Officials were standing over the ball on the second attempt with 4 seconds remaining on the play clock, which led to the delay of game.

"I usually try to give [the officials] the benefit of the doubt, but they lost control of that play," Bills long-snapper Garrison Sanborn said after the game. "They didn't know what was going on, and they let the crazy situation affect it, in my opinion. They needed to pump it up [reset the play clock]. It's a very standard, simple thing they do all the time, and they never pumped up the clock back to restart it once we got the right [kicking] ball. So that was all on them."

Added Rex Ryan: "From an officiating standpoint, I think you can do a little better than that."

Anderson acknowledged the error after the game, "If there was that little time left, then that's probably a mistake on my part in not pumping the play clock back up. But I was not aware that it was that far into the play clock."

Blandino later said on NFL Network that Anderson should have reset the game clock prior to the delay of game.

"We are absolutely going to address it," Blandino said of the entire sequence. "Anytime you have a sequence like that at any point during the game we want to see what happened and just walk through the steps of where the breakdown was. Regardless of the outcome of the game, we are going to address the situation with our crew."

Though he wasn't involved in the game, Baltimore Ravens kicker Justin Tucker was also quick to voice his displeasure for the no-call on roughing the Bills' kicker:

Kevin Seifert and Mike Reiss contributed to this report. 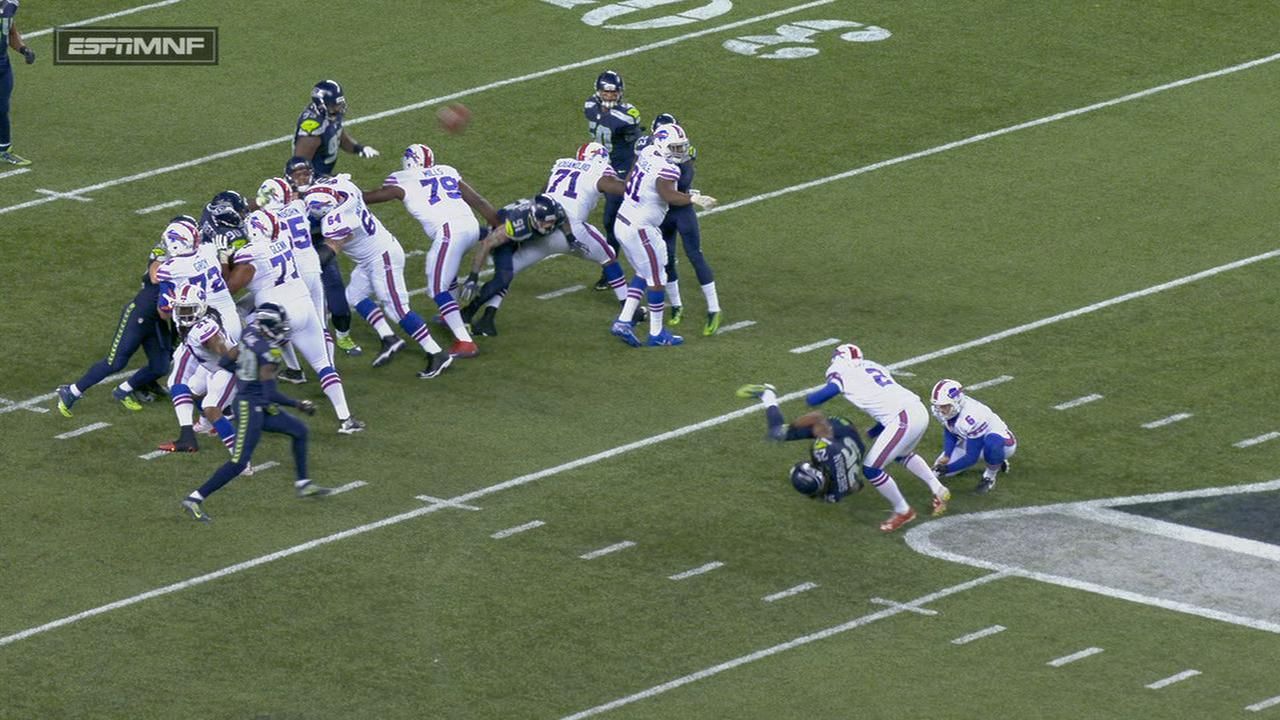 Sherman takes out Bills kicker; Rex Ryan flips out
Richard Sherman jumps offside but plows into Bills kicker Dan Carpenter. Rex Ryan unhappy with the whole situation, it eventually results in the Bills having another chance to kick the ball.