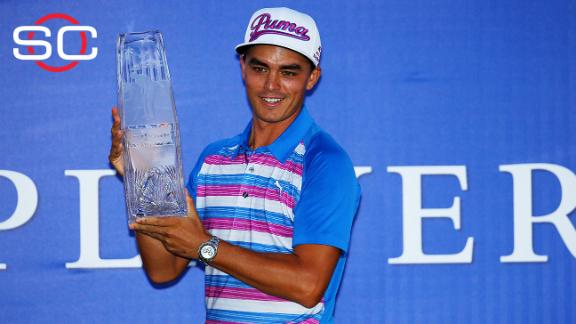 PONTE VEDRA BEACH, Fla. -- The latest survey was unanimous, not anonymous:Rickie Fowler can deliver the goods.

Facing a 5-shot deficit with six holes to play, Fowler produced the greatest finish in the 34-year history of the TPC Sawgrass. In a three-man playoff on three of the most visually intimidating holes in golf, he never backed down.

And when he faced that nervous shot over the water to an island for the third time Sunday, he was as good as ever.

No, there was nothing overrated about this kid.

Criticized in an anonymous survey by some of his peers for not being able to win, Fowler answered with a captivating victory at the Players Championship. At a tournament that dresses up like a major, Fowler looked the part in beating the strongest field in golf with an array of shots that won't be forgotten.

As for that survey?

"I laughed at the poll," he said. "But yeah, if there was any question, I think this right here answers anything you need to know."

It was hard work.

He took six shots on the par-3 17th hole, which is not unusual for a Sunday except that Fowler played it three times. And even with the record-setting finish at the Stadium Course -- birdie-eagle-birdie-birdie on the last four holes for a 5-under 67 -- Fowler still had to face Sergio Garcia and Kevin Kisner, who produced big shots of their own.

For the first time, the Players went to a three-hole aggregate playoff starting on the par-5 16th, where, earlier, Fowler hit a 3-wood into the breeze to 30 inches for an eagle that made this moment possible.

They all made pars on the 16th.

Kisner rolled in a breaking 10-foot birdie putt on the island-green 17th to keep pace with Fowler, who hit his tee shot to 6 feet and converted the birdie. Garcia, who in regulation made a 45-foot birdie to give him new life, failed to repeat the putt from about the same range in the playoff. All three players made par on the final hole, which eliminated Garcia.

Fowler and Kisner, who closed with a 69 and lost for the second time in a month in a playoff, headed back to the 17th hole for the third time. The great shots kept coming. Kisner barely cleared the mound, and the ball settled 12 feet away. Fowler answered by taking on the right side of the green and sticking it just inside 5 feet.

It was the second time in a month that Kisner, winless in 102 starts, lost in a playoff despite making clutch putts.

"Golf is a hard and cruel game," Kisner said. "But hats off. I mean, shoot, these guys are good, I'm telling you. Don't give up on anybody."

Fowler never seemed to miss over the final two hours, and he calmly clutched his fist to celebrate his first PGA Tour victory in three years.

"I've been waiting a long time for this," Fowler said. "Back in the winner's circle."

Garcia, who had a 2-shot lead heading to the back nine, closed with a 68. He had a 20-foot birdie putt to win in regulation that missed badly to the right. And he faced a crowd that was increasingly hostile to the Spaniard, perhaps remembering the tiff he had with Tiger Woods two years ago.

His caddie was asking for security when Garcia made the turn. In the three-hole playoff, a small group of fans yelled, "U-S-A!" as he took the putter back.

It marred what was otherwise sheer brilliance, a most unforgettable final hour in a tournament that has a history of them.

For Fowler, the timing couldn't have been better.

One of the questions in SI Golf's annual player survey -- players do not give their names -- was to pick the most overrated player on the PGA Tour. Fowler and Ian Poulter shared first place at 24 percent. Fowler has never faced this level of criticism. He is a favorite among fans and most players for his considerate behavior.

He tried to play it down, though he said on more than one occasion this week that it would motivate him.

Fowler was five shots behind Garcia when he "hit the button." It was more like hitting warp speed.

The Stadium Course has rarely lacked for greater theater over the past three decades.

This topped them all.

Over the final hour, six players had hopes of winning the richest prize in golf. Four of them were tied for the lead.

Ben Martin raced into the picture with three straight birdies, but he pushed his tee shot into the woods on the 18th, pitched out and missed his par putt for a 70 that knocked him out of the playoff. Bill Haas twice had a chance to tie for the lead, and he failed to make birdie on the 18th to join the playoff.

The finish by Garcia and Kisner would have been talked about for years. On this day, thanks to Fowler, it was nearly an afterthought.

So were the two biggest names in golf. The action was that good.

Woods had a 72 and tied for 69th, his worst position ever in The Players Championship. Rory McIlroy, who started the final round 4 shots behind, didn't get going until it was too late. He closed with a 70 and tied for eighth, 4 shots behind.