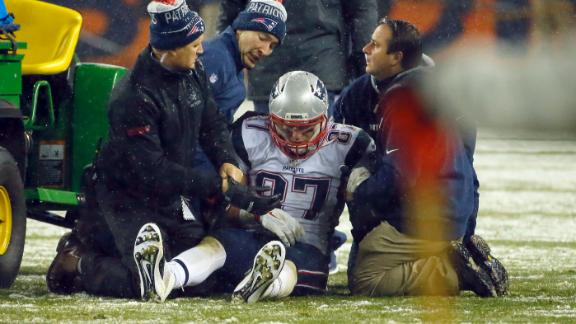 DENVER -- New England Patriots star tight end Rob Gronkowski was carted off the field after injuring his right knee in the fourth quarter of Sunday's 30-24 loss to the Denver Broncos.

The Patriots immediately announced Gronkowski would not return to the game. ESPN footage showed Gronkowski walking from the X-ray room to the Patriots' locker room with a slight limp.

A source told ESPN's Adam Schefter that Gronkowski will undergo an MRI on Monday morning. "We think he is going to be OK," the source said.

Patriots coach Bill Belichick said after the game that he did not have an update on Gronkowski's status.

Gronkowski was in the locker room as reporters entered after the game but did not answer questions. At one point, he bent over to pick up his luggage, walked over to tight ends coach Brian Daboll and discussed details of the team's overtime loss before walking to the team buses.

Gronkowski's presence in the locker room immediately after the game was viewed by some players as an encouraging sign.

"Hopefully it's not too serious. Our fingers are crossed," quarterback Tom Brady said Sunday.

"Just seeing Gronk walking around ... I hope he's OK and it's nothing that will keep him out," receiver Brandon LaFellsaid. "We need to get that guy back as soon as we can."

Gronkowski suffered the injury with 2:49 remaining in the fourth quarter, when Denver defensive back Darian Stewart hit him low on an incomplete pass. Gronkowski's leg whipped back as it made contact with Stewart.

He immediately writhed in pain on the ground before being tended to by the Patriots' medical staff and eventually carted to the locker room. Belichick and Brady came to check on Gronkowski in a reflection of the severity of the situation.

"I hate to see it, but it really is the only way defenders can hit now," Brady said. "I bet if you asked the players, they would really rather go high than low. I don't think it's dirty. I just think that is how football is played now."

Without Gronkowski, New England's pursuit of an undefeated season ended.

Losing Gronkowski would be a devastating blow for the Patriots, although they have experience playing without him. Gronkowski broke his forearm Nov. 18, 2012, and tore his ACL on Dec. 8, 2013.

"He has been through a lot. He is a tough guy," Brady said.

The Patriots, who entered the game with a 10-0 record, have already been decimated by injuries to star receiver Julian Edelman, starting left tackle Nate Solder, running back Dion Lewis and receiver Danny Amendola.

Meanwhile, starting linebacker Jamie Collins has missed the past four games with an undisclosed illness, and another starting linebacker, Dont'a Hightower, left Sunday's game with a knee injury in the second quarter and did not return.

Gronk leaves game with right knee injury
Patriots TE Rob Gronkowski is carted off the field in the fourth quarter after he takes a hit to the right knee by Broncos DB Darian Stewart.