Rob Gronkowski to appear with clan in Family Feud episode 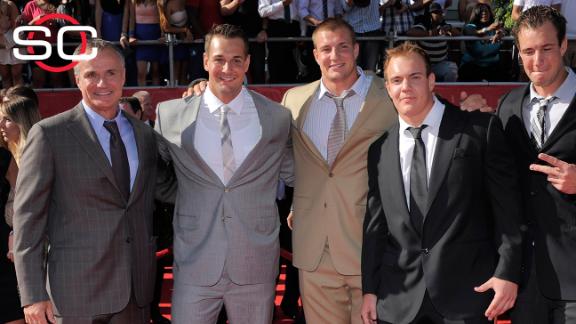 Rob Gronkowski will be taking his legendary off-the-field act to one of the most legendary game shows on TV.

Gronkowski's brother, Chris, said Tuesday in an interview with a Boston radio show that the family's four oldest brothers will be filming an episode of "Family Feud" on ABC this weekend along with their father.

Chris Gronkowski did not indicate who the family would be facing off against while speaking with The Sports Hub 98.5 WBZ-FM -- or whether there were conditions set on what if any topics for the show's survey questions were off limits.

Gronkowski and the tight end's New England Patriots, of course, are coming off a Super Bowl victory that was clouded by Deflategate, which resulted in a $1 million fine, the docking of two draft picks and a four-game suspension for quarterback Tom Brady.

Gronkowski will also been seen this summer in "Entourage" and will be featured in a cop role in another movie filmed recently -- "You Can't Have It" -- in which Gronkowski brother Dan will also appear as a cop.