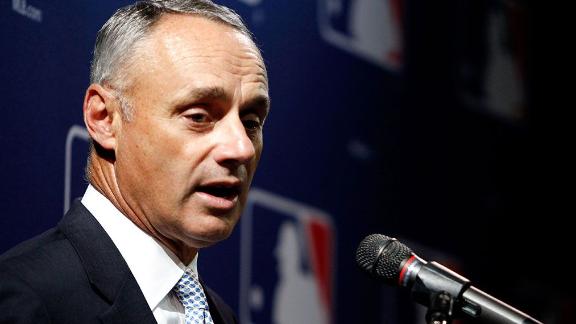 In his first days as Major League Baseball commissioner, Rob Manfred has been open to considering making changes to help make the sport more marketable.

Proving that nothing is off the table, Manfred said Monday that he would entertain shortening the regular season if there was interest in doing so.

"I don't think length of season is a topic that can't ever be discussed," Manfred told ESPN.com. "I don't think it would be impossible to go back to 154 [games]."

Manfred said discussion of season length is not at the top of his mind, adding that insiders he talks to don't think having a season of 162 games is something that needs to be dealt with anytime soon. Manfred said concerns over the pace of the game are taking the priority. Last week, MLB implemented new rules for the upcoming season that seek to reduce the average time of a game, which clocked in at 3 hours, 2 minutes in 2014.

The American League moved from a season of 154 games to 162 games in 1961; the National League followed a year later.

"We already have some of our record books which reflect a 154-game season and obviously some of it reflects a 162-game season," Manfred said. "So there's some natural flexibility there. But if anyone suggests to go to something like 110 games, then there's a real problem. That will throw all our numbers out of whack."

Last year, fewer than 9 percent of position players played in at least 150 games, the lowest percentage in major league history, according to research by Stats LLC and published Monday by the Wall Street Journal.

Any change to the length of the season would have to be collectively bargained with the Major League Baseball Players Association since it affects the working conditions of the players and could change the number of service days, currently 183, in a season.