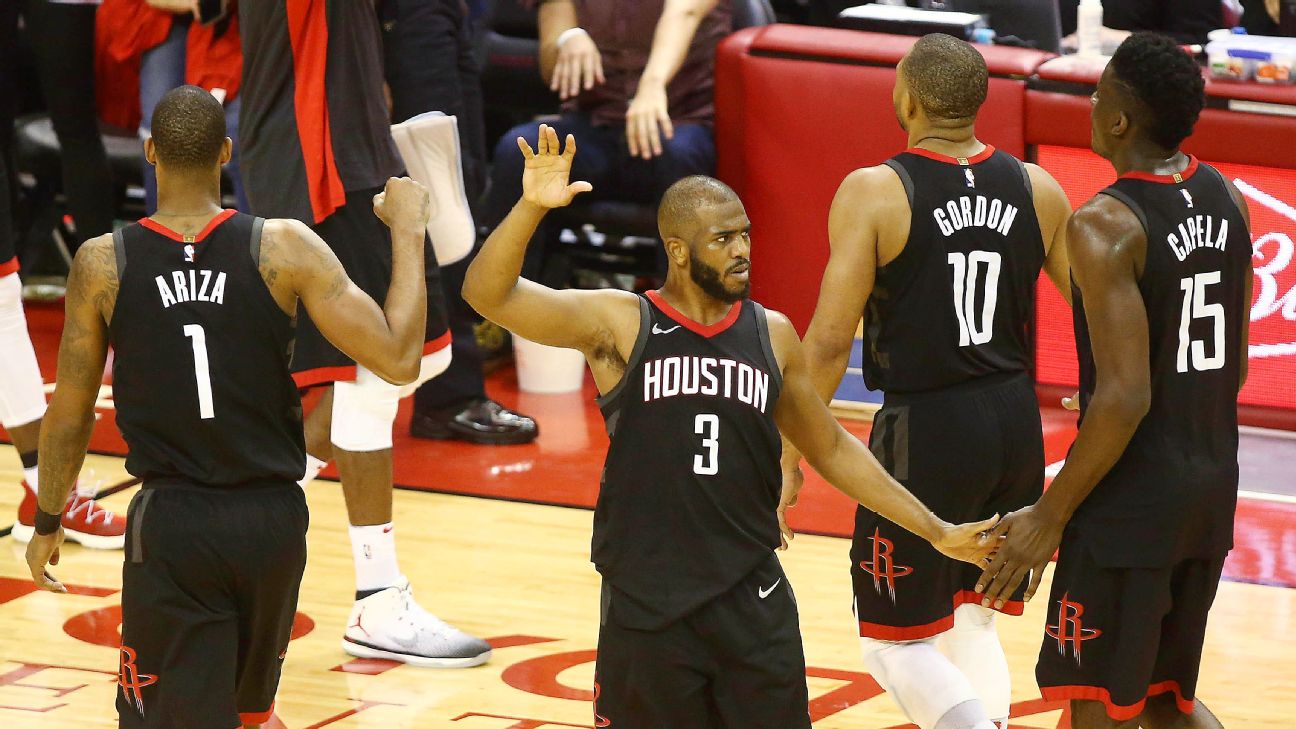 HOUSTON -- The call came in a little after 1 a.m. early Tuesday morning. PJ Tucker saw the caller ID and shook his head. James Harden was calling to talk about the Houston Rockets' demoralizing loss to the Golden State Warriors in Game 1 of the Western Conference finals on Monday. Tucker wasn't sure if the MVP front-runner was calling to vent or cheer him up. Either way, he was in no mood.

"I was so mad I didn't answer the phone," Tucker told ESPN on Wednesday night after the Rockets righted the ship to win Game 2 127-105 and salvage a split on their home court. "James was mad I didn't answer. But it wasn't one of those where we had to talk it out. We all knew what happened.

"We played like the Rockets tonight. The first game, I don't know who that was."

To a man, the Rockets insisted they didn't change their approach in Game 2 after being criticized for playing such an isolation-heavy game Monday night. If anything, they seemed to double down on that approach and way of being Wednesday night. They just did it a whole lot better.

"I had better opportunities. We moved the ball better. Everybody was knocking down shots. Once we do that, how can you stop us?" said Rockets guard Eric Gordon, who scored 27 points including six 3-pointers Wednesday.

According to Second Spectrum, the Rockets actually finished with more isolation plays Wednesday (46) than they did Monday (45), when they ran more isolations than any team in any game over the past five years. This time though, it was spread around more equitably than in the Game 1 loss. Harden went from 26 isolation plays to 16, andChris Paul increased his from 10 to 16 -- leading to increased playmaking opportunities for one of the best point guards of all time.

Between Harden giving up more of the playmaking responsibilities to Paul, and running more plays for Tucker, Gordon and Trevor Ariza, the Rockets were far more balanced offensively than in Game 1, when coach Mike D'Antoni joked that he'd have to ask Harden to score 55 points after he finished with 41.

Harden didn't shoot nearly as well Wednesday night, hitting just nine of his 24 shots, but the Rockets didn't need him to carry them with the far more balanced attack. Ariza (19), Gordon (27) and Tucker (22) combined for 68 points on 70 percent shooting Wednesday after an abysmal 24 combined points on 38 percent shooting Monday.

After two days of defending their way of being against the criticism in Game 1, the Rockets felt vindicated Wednesday.

"Oh yeah," D'Antoni said derisively, when asked if the change of fortunes was due to adjustments. "We went from the wide-open California offense to the triple threat. I mean, we changed everything up.

"NO! We did exactly what we did. We played harder. We got into them. They felt us physical. We didn't quite have that same intensity in the first game. Our guys are great and they learned from [Game 1], snapped back and did the job."

In a way, the Warriors did the same thing. All season, Golden State has been its own worst enemy, getting arrogantly sloppy when it demonstrates superiority over an opponent.

Usually that manifests with an abundance of turnovers, and Wednesday was no difference. The Warriors had seven turnovers in the first quarter alone and 11 by halftime after only nine in all of Game 1.

"That's who we are," general manager Bob Myers lamented at halftime.

Indeed, the Warriors were 26th in the league in turnovers during the regular season, averaging 15.4 per game.

Golden State cleaned up some of that sloppiness in the second half, with only four turnovers that led to four Rockets points. But the tone had been set.

"I think this game was a matter of the Rockets bringing the force that's necessary to win a game and we didn't," Warriors coach Steve Kerr said. "We had seven turnovers in the first quarter. We set the tone early with our own play, and allowed them to get some confidence and some easy buckets in transition. We let guys get going.

"We got what we deserved. They kicked our butts. No other way to say it."

The only Warrior who seemed to be sharp Wednesday was Kevin Durant, who basically carried his team when nobody else could hit a shot or find a rhythm. Durant had a game-high 38 points on 13-of-22 shooting, but noticeably no assists as the Rockets forced him into isolation situations and decided to live with the results so long as he didn't get anyone else involved.

Stephen Curry was the only Warrior other than Durant to finish in double figures, and he had an underwhelming 16 points on 7-for-19 shooting. In the series he has made just two of his 13 looks from beyond the 3-point arc. His (-20) plus-minus rating Wednesday was his worst all season. It's the second time in his playoff career he has scored fewer than 20 points in consecutive games. The last time came in the first three games of the 2016 NBA Finals, when Curry was coming back from the same knee injury (a sprained MCL) as he's attempting to this time.

Afterward, Curry insisted that his health has nothing to do with his subpar performances so far this series. However, after Game 1 he did concede that he'd tweaked something during the game. Kerr joked that Curry's lingering injury issues were "13.7 percent" responsible for his off night. Instead he pointed to a lack of connection on defense, where the Rockets are making a point of targeting Curry and forcing him to expend a lot of energy. According to Second Spectrum, Curry was the primary defender on 11 isolation plays, the most of any Warrior. Kevon Looney (6) was the next most targeted Warrior.

"It was just a frustrating night all around," Curry said. "But I'll shoot the ball better and play better defense. Other guys will get involved and we'll be in great shape. There's not panic. No houses-on-fire mentality in our locker room. We're in pretty good shape right now." 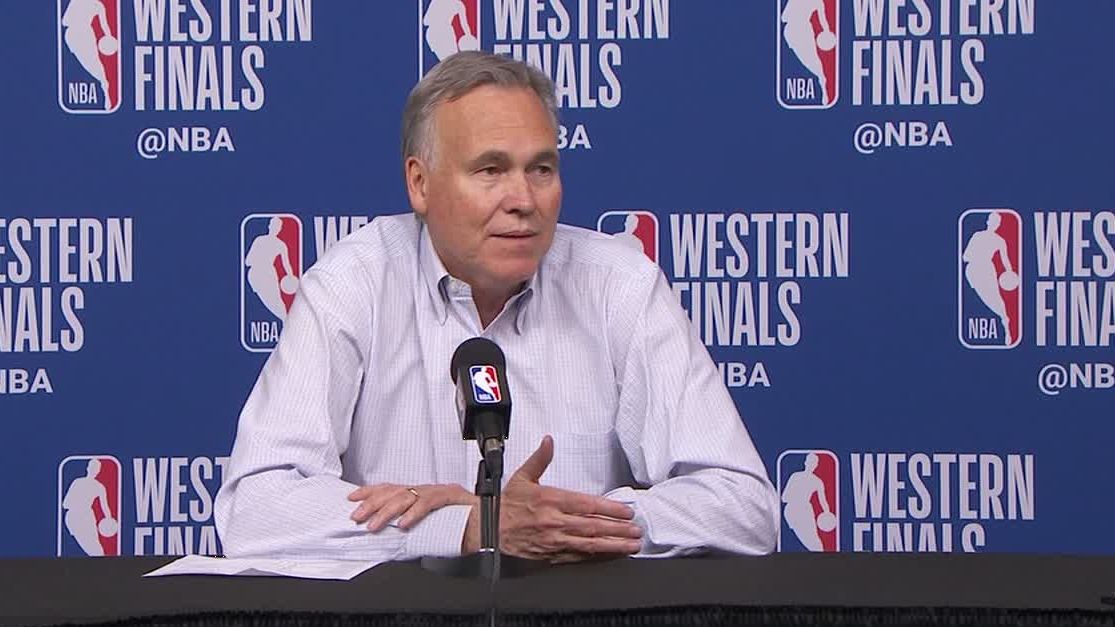 D'Antoni: 'We can beat anybody, anywhere, at any time'
Mike D'Antoni says that it would have been rash of him to change anything after Game 1 because they're comfortable with their style of play.
Report a correction or typo
Related topics:
sportsespnwestern conference finalsgolden state warriorshouston rocketsgame 2western conference playoffsnbanba playoffs2018 playoffs
Copyright © 2021 ESPN Internet Ventures. All rights reserved.
More Videos
From CNN Newsource affiliates
TOP STORIES