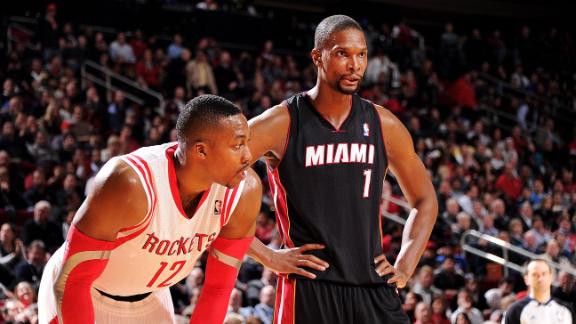 The Houston Rockets believe they will have commitment "soon" from Chris Bosh to sign with the team after Miami Heat teammate LeBron James announced Friday he is leaving to return to the Cleveland Cavaliers, a source close to the situation told ESPN.com's Marc Stein.

The Rockets have made a maximum offer to Bosh of four years, $88 million, according to sources.

The Rockets traded guard Jeremy Lin and a future first-round pick to the Los Angeles Lakers on Friday, a league source told ESPN's Jeff Goodman. After trading Lin, the Rockets' plan now is to complete their agreed-upon trade of Omer Asik to the New Orleans Pelicans.

Bosh, since opting out of the final two years of his deal -- worth $42 million -- with the Miami Heat, had planned to see what James decided before making his choice.

Bosh would give the Rockets a big forward with 3-point range, making him the the ideal frontcourt sidekick to pair with All-Star center Dwight Howard.

Houston has until 11:59 p.m. Sunday night to match the Mavs' offer to Parsons, who currently accounts for a $2.9 million hold on the Rockets' cap. The Rockets can exceed the cap to keep Parsons.

ESPN The Magazine's Chris Broussard contributed to this report.