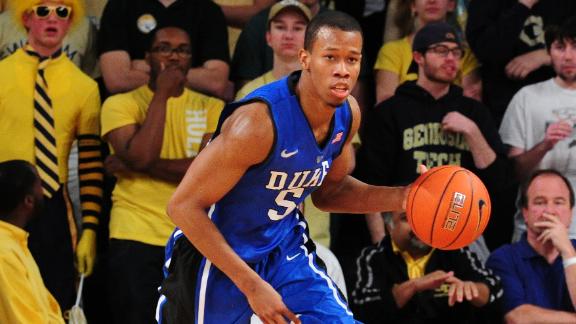 One day after freshman star Jabari Parker officially left for the NBA, fellow Duke forward Rodney Hood did the same.

The 6-foot-8 Hood, who played just one season in Durham, N.C., after transferring from Mississippi State, is considered a definite first-rounder by many NBA executives and could be taken in the lottery. Parker will likely be chosen in the top three picks of the June 26 draft.

"Rodney had two terrific years here at Duke," coach Mike Krzyzewski said in a statement. "He was an integral part of our team two years ago because he was such a great practice player, and this year he was one of the best players in the country. So consistent, and a great young man on and off the court. He will do really well in the NBA."

The Mississippi native made the SEC all-freshman team in 2011-12. He is a versatile scorer who can finish at the basket, and he also shoots well from beyond the arc. Hood made 42 percent of his 3-point attempts and shot 81 percent from the free throw line.

So Duke loses Parker and Hood, but Krzyzewski will welcome in the No. 1 recruiting class in the country next season -- one that includes big man Jahlil Okafor (No. 1 in ESPN rankings), point guard Tyus Jones (No. 4) and wing Justise Winslow (No. 15).