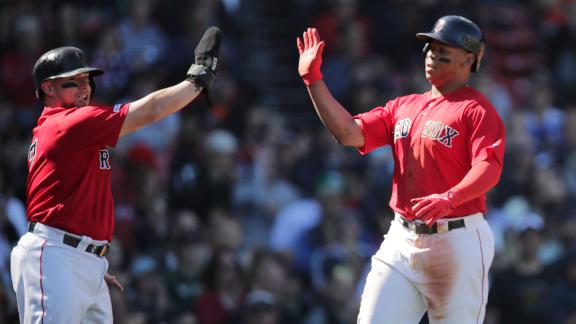 BOSTON -- A year after their record-setting, World Series championship season, the Boston Red Sox are looking for meaning wherever they can find it.

Long ago finished in the AL East race and on the verge of wild-card elimination as well, the defending champs managed to keep alive Eduardo Rodriguez's chances of a 20-win season, barely saving his 18th victory while beating the San Francisco Giants 5-4 on Thursday.

"There was a lot of talk about that," said manager Alex Cora, who led the team to 108 wins and the title in his first season on the bench. "We set the rotation for him to get as many wins as possible. If we didn't win this one, we probably make an adjustment but he's still got a shot."

After entering the season as the No. 5 starter behind ace Chris Sale, Cy Young winners David Price and Rick Porcello and World Series hero Nathan Eovaldi, Rodriguez (18-6) has established himself as Boston's best pitcher in an otherwise forgettable season.

He struck out 10 over six innings of two-hit ball, walking two and allowing one unearned run to reach 191 1/3 innings pitched and 199 strikeouts for the season -- both career highs, by far. He is scheduled to start again on Tuesday against Texas and then again against the Orioles on the final day of the season.

"He's been a model of consistency," said Brandon Workman, who pitched into and out of a bases-loaded jam in the ninth for his 15th save. "He's close to 20 wins and he's close to 200 innings pitched. That's two good benchmarks for him to reach."

Xander Bogaerts had a pair of RBI singles to drive in three runs, and Rafael Devers had two RBI for Boston, which would be eliminated from the wild-card race with one more loss or Tampa Bay win.

Mike Yastrzemski, the grandson of Red Sox Hall of Famer Carl Yastrzemski, was supposed to get the day off "to take it all in," but manager Bruce Bochy sent him up as a pinch-hitter in the eighth. He singled and scored as the Giants cut a four-run deficit to 5-3.

He came up again in the ninth after Workman loaded the bases with nobody out, then struck out Brandon Crawford.

"I was hoping," Bochy said. "That would have been pretty nice if Yaz hit a gapper or something to win the game for us."

Yastrzemski struck out and then, after Kevin Pillar walked to make it a one-run game, Workman fanned Evan Longoria.

"It was really fun to have the best seat in the house for the game," Yastrzemski said. "As great of an environment as it was, there was some stress and some stuff that I wasn't used to. I learned how to deal with it. ... So that just kind of gives me a little more confidence."

Madison Bumgarner (9-9) lost in his first career start at Fenway Park, giving up five runs on nine hits and two walks in five innings while striking out seven. He allowed the first four Boston batters to reach safely and fell behind 2-1 after one inning, and 5-1 after two.

That was the last of the scoring until Pillar hit a two-run double off Marcus Walden in the eighth to make it 5-3. Matt Barnes came in and walked Longoria, then gave up Buster Posey's high chopper that handcuffed Devers at third to load the bases.

But Barnes struck out Stephen Vogt to end the inning.

The younger Yastrzemski said the mementoes he will value most from the week are a pair of poster-sized photos of him and his grandfather walking in front of the Green Monster on Tuesday, and catching the ceremonial first pitch from the former Red Sox captain on Wednesday night.

"I think those will be something that I cherish forever," said Mike Yastrzemski, who homered in Tuesday night's game. "Just one of those once-in-a-lifetime moments."

Rodriguez is 9-0 in interleague starts in the past three seasons, including Game 4 of the 2018 World Series, and the Red Sox have a 15-0 record in those games.

Rodriguez has gone four straight starts with at least six innings and no more than one run. He has made it at least five innings in 26 straight starts since the beginning of May. Boston is 24-8 in his starts this year, tying Gerrit Cole for the most wins behind any starting pitcher in the majors.

The game was played with three umpires because Sean Barber, who was scheduled to work the plate, was a late scratch. No reason was given. ... Bumgarner reached the 200-inning mark for the seventh time in his career.

Red Sox: Reigning AL MVP Mookie Betts has been out a week for toe inflammation but could play at Tampa Bay this weekend, manager Alex Cora said. If he does, it would be at DH. ... J.D. Martinez missed his second straight game after leaving Tuesday night with groin soreness. He could also return for the Rays series.... LHP David Price will see a hand specialist.

Devers reaches 110 RBIs in win over Giants
Rafael Devers picks up his 109th and 110th RBIs with a couple hits to help the Red Sox take down the Giants 5-4.
Report a correction or typo
Related topics:
sportsespnboston red soxmlbsan francisco giants
Copyright © 2020 ESPN Internet Ventures. All rights reserved.
More Videos
From CNN Newsource affiliates
TOP STORIES
Some churches wait on CA order to reopen, others to resume in-person service regardless