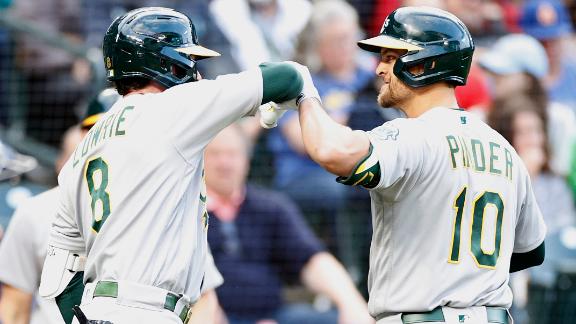 SEATTLE -- - The first three times Julio Rodríguez homered, the reaction was mostly silence. The cost of hitting long balls on the road.

The prized Seattle rookie finally got to hear the hometown roar he's been anticipating.


"(When) I've been on the road, every time I hit it they get quiet," Rodriguez said. "So now they get loud, happy about it, it definitely felt really good."

Rodríguez homered at home for the first time, a three-run shot to give Seattle an early lead, and the Mariners beat Oakland 7-6 on Monday night for their 13th straight win over the Athletics.

Cal Raleigh and Eugenio Suárez each added a two-run homer as the Mariners extended their domination of the A's dating to last season. Seattle went 15-4 against Oakland last year and hasn't lost to the A's since July 22, 2021.

After a rough first couple of weeks, Rodríguez has been one of Seattle's best hitters for more than a month. He had his fifth multi-hit game in the past nine, adding a sharp single to go along with his fourth home run.

"Julio is a gifted player. To be 21 years old and swing the bat the way he does, the way he runs - the ball just jumps off his bat. He's got that kind of bat speed and he's that strong," Seattle manager Scott Servais said. "You just don't usually see that in young players, or any players. He's only going to continue to get better and we're watching it."

Raleigh's homer in the fourth inning was his fourth of the season and just his fifth hit. Suárez added his ninth homer and third in the past eight games in the fifth.

All the Seattle home runs came off Oakland starter Zach Logue, who had allowed four earned runs total in his previous three starts. Logue (2-3) was tagged for seven earned runs. He walked four and struck out six.

"He fought himself tonight. I think the outing was not one that we're used to seeing from him," Oakland manager Mark Kotsay said.


Seattle starter Marco Gonzales pitched 5 1/3 innings to get the victory but his final numbers didn't look great thanks to some bloop hits and shaky relief work by the Mariners. Gonzales (3-4) was charged with five earned runs, but reliever Penn Murfee failed to get an out, giving up two hits and a walk after Gonzales was lifted.

Paul Sewald pitched the ninth for his second save.

"It's good to get a win. Bottom line, we've got to start to rattle off some wins," Gonzales said.

Chad Pinder hit his fourth homer of the season off Gonzales, and Cristian Pache had a two-run double off Murfee. Tony Kemp also had two RBI.

Athletics: OF Ramón Laureano was out of the lineup for a second straight game after getting hit on the hand Saturday against the Angels. There was optimism Laureano could be back in the lineup Tuesday. ... RHP Frankie Montas threw a bullpen and is on track to make his next scheduled start. Montas was struck by a line drive on the hand Saturday against the Angels.

Mariners: Seattle is optimistic that 2020 AL Rookie of the Year Kyle Lewis will be activated off the injured list Tuesday. Lewis has missed nearly a year due to right knee issues. A final decision is expected Tuesday. ... RHP Ken Giles is expected to throw live batting practice in Arizona early this week as the precursor to a rehab assignment. ... RHP Erik Swanson (elbow inflammation) had a brief setback in his recovery and won't throw for a few days.

Athletics: RHP James Kaprielian (0-2, 4.50 ERA) will make his fourth start of the season Tuesday after coming off the injured list May 1. After a rough first outing, Kaprielian has allowed five earned runs over his past 16 innings.