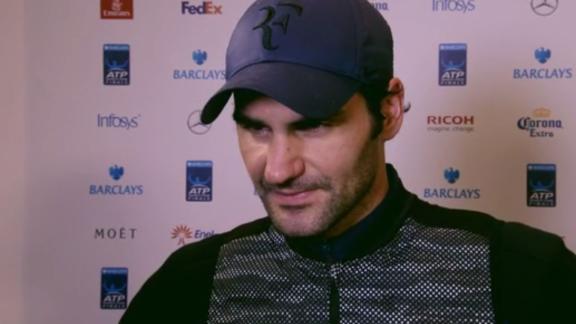 The Swiss brought an abrupt halt to Djokovic's astonishing 43-match winning run in the 2011 Roland Garros semifinals. He has now dealt the world No.1 his first defeat in 24 matches, producing a stunning 7-5, 6-2 victory to secure his place in the last four of the World Tour Finals.

In what has become arguably the greatest rivalry in the history of Open era men's tennis, Djokovic missed his golden chance to finally edge in front of Federer in their head-to-head after nine years of trying.

For those keeping score, Federer -- who received his usual raucous support in the O2 Arena -- now leads Djokovic 22-21.

The 43rd edition of this match-up did not disappoint, with Federer now assured of a place in the last four having stunned the three-time reigning champion here in two sets.

"It's always a thrill to come out here in the O2 Arena, also against a great player like Novak," said Federer on court. "With the year he's had, it's even more special. It was a special night for tennis. Cool atmosphere."

So what was the tactical masterplan? "I won't tell you because we might play again," Federer quipped.

"I did play very well, regardless of tactics. It is indoors, so aggressive tennis pays off. The tactic was to mix it up, I have to do that against Novak to have a chance."

The usually clean-shaven Federer, a former ambassador for Gillette, sported a gruffer five o'clock shadow that seemed to match the aggressive approach.

"The water is very special here in London," Federer joked. "I shaved this morning and got this beard this afternoon, it's weird."

Djokovic saw several other records fall in defeat in the evening session -- this was his first loss in 16 matches at the World Tour Finals, and his first in 39 matches indoors, a winning run that had lasted more than three years.

Federer himself was the last man to beat Djokovic in the Cincinnati final on Aug. 23, and said after his opening win over Berdych that he "was not far off" the Serb.

Indeed, there looked to be nothing between them as the first set meandered towards a tie-breaker. But Federer, seeking a record seventh World Tour Finals title, pounced to take his second set point at 6-5 with a smart half volley off his toes to an almighty roar of approval from the O2 Arena.

Djokovic's momentum completely dropped as Federer raced into a 2-0 lead in the second set. The world No.1 hit back with a break of his own to stay in the match, but Federer re-established his dominance to go 5-2 up before taking his second match point.

Suddenly Djokovic, who also won the season finale in Shanghai in 2008, has some work to do in his final group match against Tomas Berdych.

"I made a lot of unforced errors. Just handed him the win, especially in the second set," Djokovic, who beat Federer in four finals this season including Wimbledon and the U.S. Open, said in his post-match press conference.

"He tactically played well. Undoubtedly, he was the better player on the court. But I think I also allowed him to play and penetrate through the ball and dictate the tempo from the baseline."

Federer appeared to be taken aback when Djokovic's words were put to him in his press conference.

"He handed [me] the win? Well, he wasn't as good as in the first set. But I feel, honestly, with the way he's played this season, you still have to put him away," said Federer.

"It's not an easy thing to do. It's not like he played terrible. I know he can play better. Why did he play that way? I'd like to give myself credit for that, quite honestly, yeah."

Earlier on Tuesday, Kei Nishikori kept alive his hopes of qualifying for the knockout stages with a battling three-sets win over Tomas Berdych.

Tuesday afternoon's encounter was the first to go the distance in London this year with Berdych levelling from a set and a break down to force a decider before Nishikori secured a 7-5, 3-6, 6-3 victory in two hours and 23 minutes. He faces Federer next on Thursday.

Djokovic: I let Federer dictate match
Novak Djokovic discusses what went wrong for him during his round-robin match against Roger Federer in the ATP World Tour Finals.