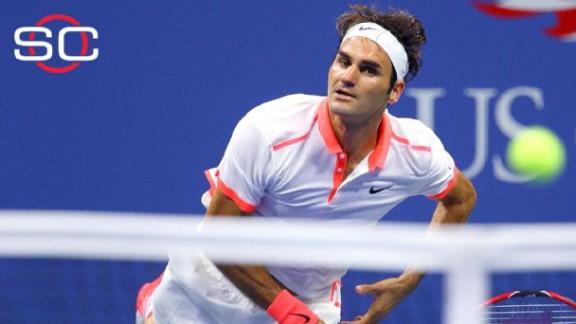 On the surface, Federer appears to have the upper hand; he has won 16 of 19 previous matches against Wawrinka, with all three of Wawrinka's wins coming on clay. The asterisk? Wawrinka won the last one, an emphatic straight-sets victory in the French Open quarterfinals on his way to the title.

"He's the best player ever," Wawrinka said of Federer. "He's playing so good, especially since the summer. I know people love him here, so hopefully I will steal some support.

"Hopefully I can still play more amazing tennis in the next one."

Federer, in his on-court interview, said he was looking forward to it.

"I think Stan played a wonderful match against me in Paris," he said. "He deserved it. Throughout his career, he's improved a lot, kept on working.

"It's really cool to have two Swiss in the semifinals of the US Open."

Federer expanded in his postmatch news conference, crediting Wawrinka's confidence with a rise in his performance.

"It took [Stan] awhile to figure out exactly what his possibilities were. I don't think he was a guy who always, you know, had enough confidence," Federer said. "I think only once when he really started to break through and he had some big wins -- I recall a big win for him when he beat[Lleyton] Hewittin the fifth deciding match in Davis Cup in Sydney. Beat him on the grass two sets to one down. Came back and won it. Played unbelievable tennis at the end.

"I'm happy he found that level of play. Two slams, got Davis Cup, Olympic gold. Has a complete career. Won a Masters 1000. Has everything he ever wanted. He has had a wonderful career."

Since celebrating his 34th birthday last month, Federer has yet to lose a set, running the table in Cincinnati in 10 sets and adding 15 more here for a total of 25 straight. He has frolicked through the draw here, drawing only a test from American John Isner, who forced him to two tiebreakers before losing the final set of their fourth-round match 7-5.

"I have tried to look at the big picture to hopefully still be playing at a high level at this age," Federer said. "I think I have worked on my game moving forward, have been able to take the ball earlier, and, you know, I think I'm volleying better than I have the last 10 years. ...Now because my serving is working quite well, you put those two things together, and standing in on the return as well, I think has changed the dynamics a little bit. It's all about keeping yourself in shape and staying injury-free. And motivated, I guess."

With eight-time Grand Slam champion Andre Agassi, as well as Justin Timberlake and Bradley Cooper in attendance, Federer hit 16 aces. He also was credited with 50 winners, against only 21 unforced errors.

"I just felt like I had extra time because I played Isner before," Federer said. "I was able to stay aggressive and enjoy the match."

Gasquet, a 29-year-old Frenchman, has now lost 15 of 17 matches to Federer but is playing some of the best tennis of his career. He was attempting to reach his second consecutive Grand Slam semifinal.

Wawrinka and Anderson were originally scheduled to play in Arthur Ashe Stadium as the last match of the day session. But when rain delayed the second women's quarterfinal between Simona Halep and Victoria Azarenka and threatened to return, the two were sent to a grateful full house at Louis Armstrong Stadium.

No. 3 seed Andy Murray was supposed to be Wawrinka's opponent in this quarter, but Anderson stunned Murray in four sets, winning the final tiebreaker 7-0 in a match that was the tournament's longest at 4 hours, 18 minutes.

Wawrinka has won two of the past six Grand Slam singles titles -- the 2014 Australian Open and this year's French Open -- but Anderson had won four straight matches between them and eight of 10 sets.

Understandably, Anderson looked drained. The week coming into this Open, he won the title at Winston-Salem. This was his 10th match in 16 days.

Federer crushes Gasquet, on to semifinals
Roger Federer rolls over Richard Gasquet in less than 90 minutes to cruise into the semifinals.