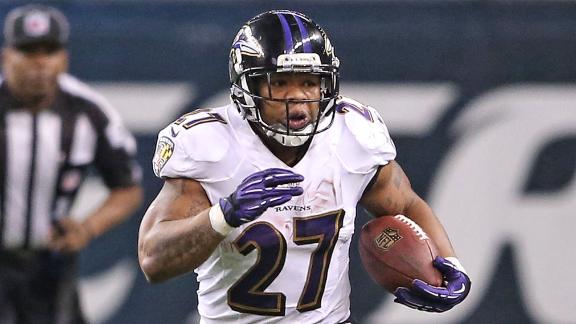 NFL commissioner Roger Goodell defended the NFL's two-game suspension of Baltimore Ravens running back Ray Rice, saying that domestic violence is "not acceptable" but emphasizing that the length of the ban is "consistent" with other punishments issued by the league.

Goodell spoke Friday at the Pro Football Hall of Fame in Canton, Ohio, addressing the media for the first time since the NFL announced Rice's controversial suspension last week.

"We have a very firm policy that domestic violence is not acceptable in the NFL, and there are consequences for that," the commissioner said. "Obviously, when we are going through the process of evaluating an issue and whether there will be discipline, you look at all of the facts that are available to us."

Goodell also fielded multiple questions about the widespread public reaction to the length of Rice's suspension, which has been criticized as lenient compared with other NFL suspensions for substance abuse and off-field incidents.

"We have to remain consistent," he said. "We can't just make up the discipline. It has to be consistent with other cases, and it was in this matter."

Goodell was asked about the length of Rice's suspension in contrast to the four-game ban that Pittsburgh Steelers quarterback Ben Roethlisberger received in 2010 for violating the league's personal-conduct policy.

"If it's their first offense, someone who has had a strong background of being very responsible in the community and doing the right things and not violating either policies or anything else that would reflect poorly on the NFL, then we take that into account," Goodell said. "When there's a pattern, we also take that into account on the other side."

Goodell also dismissed the idea that Rice's ban was short compared with drug-related suspensions, which he attributed to the league's collective bargaining agreement.

"You've got to deal with the facts, OK?" he said. "Now, when we have a drug program that's collectively bargained, and it has a step process, it takes four incidents before you actually reach a suspension in a drug-related case. So you have to respond to facts here.

"You know, you have a lot of people voicing their opinions, but I think it's important to understand that this is a young man who made a terrible mistake. [Rice's actions are] inconsistent with what we're all about, and we've dealt with it in a serious manner, and we're very confident that this young man understands where he is and what he needs to do going forward."

Rice was arrested Feb. 15, after he allegedly struck then-fiancée Janay Palmer unconscious during an altercation at an Atlantic City hotel. Video surfaced online showing Rice dragging an apparently unconscious Palmer out of an elevator. The couple has since married.

Rice pleaded not guilty to a third-degree charge of aggravated assault and avoided trial by being accepted into a pretrial intervention program in May. The NFL announced last Thursday that Rice would be suspended for the first two games of the upcoming regular season and fined three game checks.

"I take into account all of the information before I make a decision on what the discipline will be," Goodell said. "In this case, there was no discipline by the criminal justice system.

"They put him in that diversionary program, and I had seen Ray after that. I had the opportunity to hear from him, hear from his wife and hear from other people that he had brought into the hearing process, and I put all of that together to make a decision."

Rice took questions Thursday for the first time since the incident, apologizing to his wife and all women affected by domestic violence.

"I made the biggest mistake of my life," he said. "My actions that night were totally inexcusable."

"I was also very impressed with Ray in the sense that Ray is not only accepting the issue and saying I was wrong, but he is saying I want to make a powerful difference in this area," Goodell said. "I think you heard from him yesterday -- he's a young man who really understands the mistake he made, and he's bound and determined to make a difference."

On other league matters, Goodell declined to comment on possible suspensions for three players implicated in the Miami Dolphins' bullying scandal last season, but he said they've fulfilled league requirements so far.

Richie Incognito, Mike Pouncey and John Jerry were all implicated in the episode, which prompted tackle Jonathan Martin to quit the team.

"There are different issues with different individuals," Goodell said. "The bottom line is everything is proceeding. They're doing what they've been asked to do. And that we will make individual decisions if necessary."

Pouncey is still with the Dolphins. Jerry is with the New York Giants. Incognito, whose troubled relationship with Martin caused the scandal to mushroom, is unsigned.

ESPN.com Ravens reporter Jamison Hensley and The Associated Press contributed to this report.