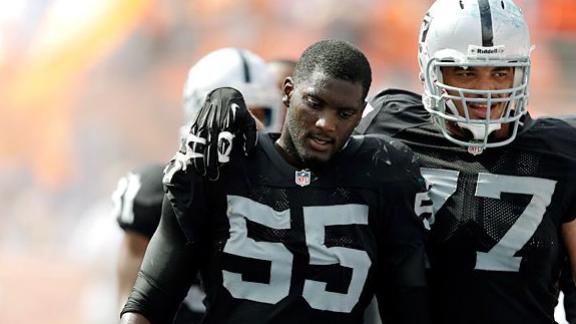 Rolando McClain is walking away from the NFL again, this time for good.

On the day the linebacker was due to report to the Baltimore Ravens for the first day of the team's offseason workout program, he sent a text to ESPN.com saying, "I gotta follow my heart. It ain't football. If football made me complete I would play. But whenever I think of it my heart pulls me away from whatever reason. ... This means I'm done."

Last week the Ravens activated McClain, 24, off the reserve-retired list. Last year, after McClain had been released by the Oakland Raiders following a string of arrests, the Ravens signed him to a one-year contract worth the veteran minimum of $700,000.

McClain had not played football since the 2012 season and was no lock to make the Ravens' roster. He was reportedly late for a workout with team officials last week, which he later disputed. Left undisputed was that the workout did not go well. He reportedly failed a conditioning test and it would not have been surprising if the team had released him.

In college at Alabama, McClain won the Lambert award, given to the nation's best linebacker. The Raiders drafted him with the No. 8 overall pick in 2010.

He would record 246 tackles and 6.5 sacks in his three seasons in Oakland, which were mostly marked by off-field issues. He was arrested three times in an 11-month span.

Last year, after the Ravens signed him, he abruptly retired to get his "priorities straight." He re-enrolled at the University of Alabama and took classes toward his degree in family financial planning. In an interview with ESPN The Magazine last October, he explained his mindset at the time of his decision to retire by saying, "I was feeling like Aaron Hernandez or something, like I just wanted to kill somebody." McClain had indicated an interest in returning to play in the NFL. Now, he said he wants to finish his degree and coach football one day.

"Now I know God has something else planned for me and that my life is bigger than football," he said in a text.