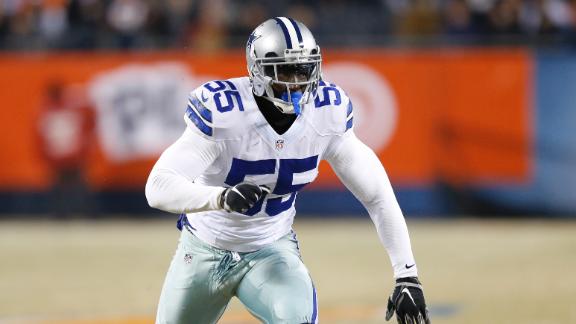 Dallas Cowboys linebacker Rolando McClain has been suspended without pay for the first four regular-season games of the 2015 season for violating the NFL's substance abuse policy.

McClain can return to the Cowboys' active roster Oct. 5, following the team's Week 4 game against the New Orleans Saints.

The 25-year-old will be eligible to participate in training camp and preseason games.

"I apologize to my family, the Cowboys organization, my teammates and Cowboys fans for my mistake," McClain said in a statement. "I will not break the rules of my profession in the future, and I regret my error. I look forward to returning to the field on week 5, when I hope to help my team beat the Patriots."

McClain spent most of the offseason in Alabama rehabbing his knee, skipping the voluntary organized team activities (OTAs) before reporting for minicamp.

Acquired last July in a trade from the Baltimore Ravens, McClain was credited with 108 tackles, according to the coaches, last season despite missing four games. The Cowboys re-signed him to a one-year deal that included a $500,000 signing bonus and $750,000 base salary.

McClain retired in April 2014, telling ESPN.com in a text that he had lost his desire to play football. It was the second time he had retired, as he also called it quits in 2013.

However, he unretired for the second time in July 2014, and was traded by Baltimore to Dallas.

The suspension leaves the Cowboys without two key defenders to start the season. Defensive end Greg Hardy was suspended for the first 10 games for his role in a domestic violence case. Hardy is appealing the suspension.

Information from ESPN.com's Todd Archer was used in this report.