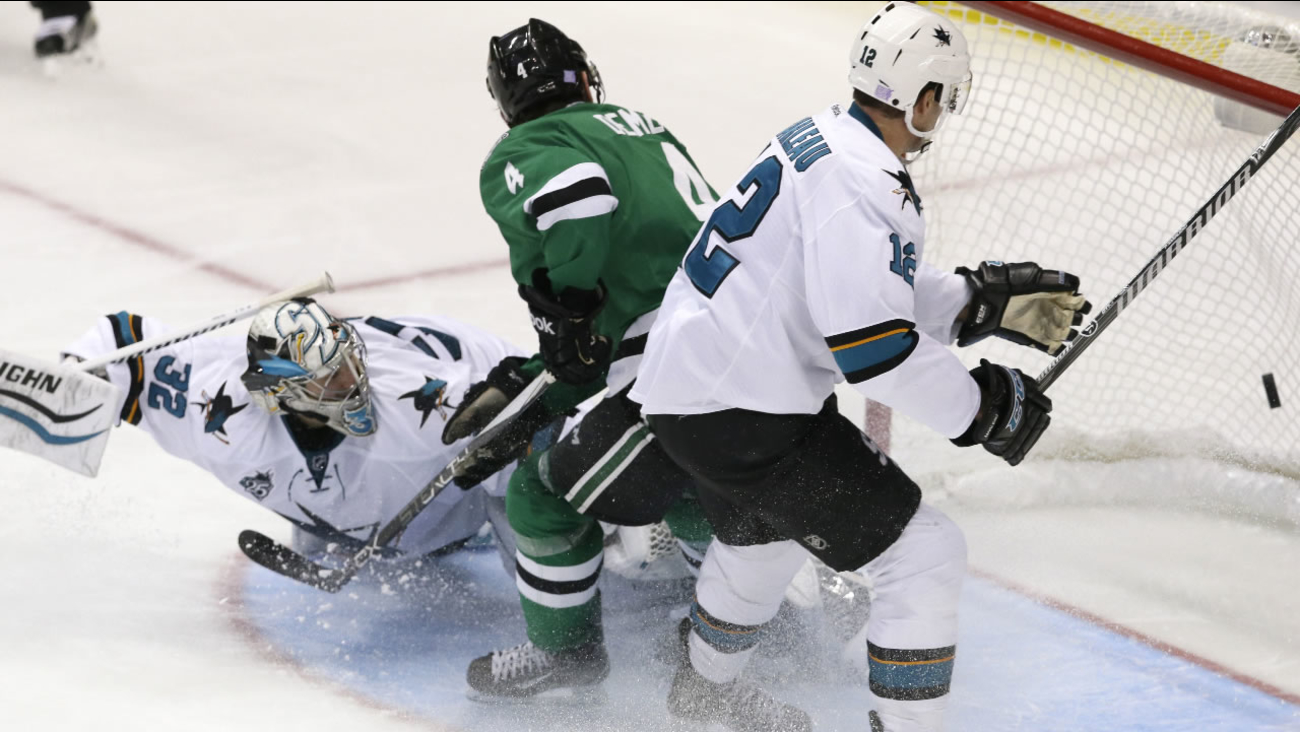 DALLAS -- Antoine Roussel is on quite a run. Same for the Dallas Stars.

Roussel broke a third-period tie for the second time in three games, and the Stars beat the San Jose Sharks 5-3 on Saturday.

The game-winners are the only goals this season for Roussel, who also had two assists against San Jose. It was his first career three-point game in his fourth season, all with the Stars.

"Most nights, we won't score," Roussel said of his line with Vernon Fiddler and Colton Sceviour. "We try to play good (penalty kill) and stuff like that. Tonight, we got rewarded. The last one was lucky, and that's awesome to get."

John Klingberg's shot from the right point hit Sharks goalie Alex Stalock's pads and went to Roussel with 6:27 to play.

"I tipped the puck first, it hit my skate second, and slowly getting in the net," he said.

Dallas has won eight of the last nine games. San Jose has lost five of six.

"We went into the third and made one mistake, and it ended up in," Sharks coach Peter DeBoer said. "I wouldn't even pin that on a defenseman. That was more of a forward goal against."

Patrick Sharp scored the first goal for the Stars, who didn't trail in the game. Fiddler had a goal and two assists, and Jason Demers added a short-handed goal and an assist.

Tyler Seguin added a power-play goal into an empty net with 1:23 remaining, and Antti Niemi made 26 saves.

"This has been an amazing start," Niemi said. "And I think we can play even better than this with more hard work."

Niemi and Demers played for the Sharks last season.

"He's a really good friend, good teammate," San Jose's Joe Pavelski said of Niemi. "It's a tough game for him to play in as well. He played well for them."

Pavelski scored the first of the Sharks' three second-period goals, helping them into a 3-3 tie after two. Joel Ward also scored on the power play, and Matt Nieto had a short-handed tally.

Sharp helped the Stars get off to a nice start 2:33 into the game. He won a battle for the puck in the neutral zone, passed to Seguin and skated to the net in time to wrist in the rebound of Demers' shot.

The Sharks quickly bounced back. Pavelski tipped in Brent Burns' drive from the top of the slot at 8:23, and Nieto took a pass from Tommy Wingels and beat Niemi on a 2-on-1 break at 9:56.

Stalock had 21 saves for the Sharks.