Sabres get Evander Kane in trade 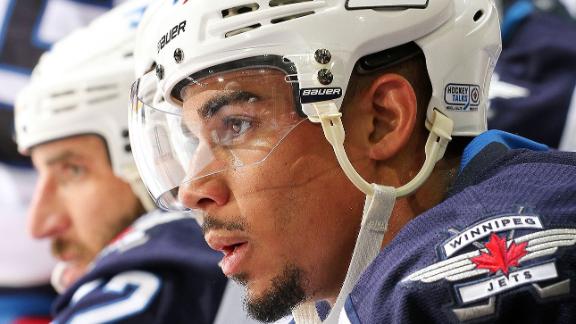 ESPN
BUFFALO, N.Y. -- The Winnipeg Jets sent embattled left winger Evander Kane to the Buffalo Sabres in a seven-player trade Wednesday, loading up in hopes of their first playoff run since moving from Atlanta.

"I'm excited about what this trade brings to our organization," Jets general manager Kevin Cheveldayoff said. "At the end of the day, it is a big deal, but we think it's something that's going to help us both in the short term and really help us in the long term."

Kane was a healthy scratch for the Jets' game against his hometown Vancouver Canucks on Feb. 3. A few days later, the team announced Kane would have season-ending surgery on his left shoulder.

"In his mind, he probably wanted a more important role," Murray said. "He can be an important guy here. He's going to be a big part of any success we have here, I believe.

"He plays hard. He plays in traffic. He doesn't play a perimeter game. He plays the game right."

Kane is expected to be ready for training camp. The fourth overall pick in 2009 was Winnipeg's biggest trade chip. The 6-foot-2, 195-pound winger had 10 goals and 12 assists in 37 games this season.

Stafford, 29, has scored 145 goals and 177 assists in nine seasons with the Sabres and will allow Winnipeg to move Dustin Byfuglien back to his natural position of defense. Stafford is an unrestricted free agent after the season.

One condition of the trade is that Buffalo will retain half of the remaining salary of Stafford, who was scheduled to make $4 million this season, a source told ESPN.

Armia, Lemieux and the first-round pick can be assets for Winnipeg ahead of the March 12 trade deadline or work as chips for the future.

Murray said he knew getting Kane would be expensive.

"Either you're in and you know you're going to pay a big price, or you're out," Murray said. "As of today, we're in."

Buffalo offsets the loss of Myers with Bogosian, a 6-3 defender with 40 goals and 87 points in 393 career games.

"It's not an easy thing to have to include someone like Zach," Cheveldayoff said. "I can't speak for him, but I think it will be exciting for him. He's from upstate New York, and I think it will be an opportunity for him to be part of a growing organization."

The Sabres are in the midst of a long rebuilding process after spending the past few seasons purging high-priced players and veterans. A year ago, they traded goalie Ryan Miller and captain Steve Ott to St. Louis, and earlier in the season they dealt leading scorer Thomas Vanek to the New York Islanders.

Buffalo also acquired goaltender Anders Lindback and a conditional third-round pick from the Dallas Stars for goalie Jhonas Enroth on Wednesday. A source said the conditional on the third-round pick is that if Enroth wins four playoff games for the Stars this spring, the pick becomes a second-rounder instead.

The team is building through the draft and could be in line for one of the top two picks in June. In Bogosian and Kane, Murray thinks he has pieces to keep the team out of the top end of the draft by next season.

"I believe in these two players," Murray said. "I think that they make us a better organization and a better team. We're going to be adding young guys as we go along, and they need the right people to follow. I think these two guys fix that."

ESPN's Pierre LeBrun and Craig Custance and The Associated Press contributed to this report.