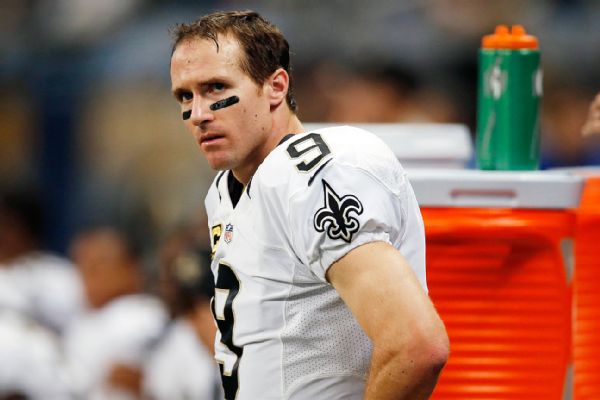 METAIRIE, La. --New Orleans Saints veterans Drew Brees and Zach Strief expressed concerns Monday that the growing mistrust in the NFL league office has spilled over from the players to the fans and is hurting the league's popularity.

Brees and Strief spoke to ESPN after the Saints players had their annual in-season meeting with NFL Players Association executive director DeMaurice Smith. They agreed that the NFL's declining TV ratings could be a result of "probably a buildup over the last few years."

"It's hard to separate 'em. It all works together," said Strief, who is in his final years as the Saints' player representative. "The NFL front office has seemed to have found a way to make everything somewhat contentious. It feels like there's this constant assault on the players, like we're two entities. It's like they don't think they need us to do this."

The Saints' comments echoed those of Seattle Seahawks cornerback Richard Sherman, who last week blamed Goodell and the NFL for making the NFL no "fun" anymore, including imposing strict rules against player celebrations.

Brees mentioned the crackdown on player celebrations as another factor that may have turned fans off in recent years.

Brees, who was an outspoken critic of Colin Kaepernick's decision to protest during the national anthem, also acknowledged that such protests could be a turn-off to fans.

"I think it's just been a culmination of a lot of things over the last three years that unfortunately might have just turned people off or caused them to be less engaged," said Brees, a former player rep and a former member of the NFLPA's executive committee, who said his hope when he first joined the NFLPA was that there would be a "partnership" between the players and the league office to move the game forward.

"And unfortunately we've never felt that feeling reciprocated from their end," Brees said. "In fact it's very much been a, 'We're gonna do things behind closed doors. And you just kind of believe what we tell you.' And unfortunately that's jumped up and bit us, and I named all those cases ... where you certainly can't trust anything that's coming out of the league office at this point.

"Listen, we as players want the best for this league. This league has so many great things to offer ... and for a long time the fans were really enjoying it. And now it seems like that's taken a hit. And it really feels like it's been the culmination of the last few years and the way the business of football is being run in the front office. That's the concerning part at this point for us."
Related topics:
sportsespnnew orleans saintssan francisco 49ersnflzach striefnew england patriotsseattle seahawkstom bradyjosh brownrichard shermandrew breesnew york giantscolin kaepernick
Copyright © 2022 ESPN Internet Ventures. All rights reserved.
TOP STORIES
EXCLUSIVE: Woman shoved to ground in Oakland's Chinatown speaks out
Health experts believe Bay Area has already reached omicron peak
LA Rams ban tickets sales to 49ers fans in Bay Area
Colorado Fire in Monterey Co. now 700 acres, 35% contained
North Bay anti-vaccine activists protest mandates
After the omicron wave, what's next for the COVID pandemic?
Families reflect on the 2 years since 1st COVID case in US
Show More
US draws down Ukraine embassy presence as war fears mount
How to use regular bills to boost your credit scores
VIDEO: Amazon driver comes face to face with bear during delivery
Kansas City Chiefs open as touchdown favorites, Los Angeles Rams 3....
Climate expert says CA may see more unusual winter wildfires
More TOP STORIES News