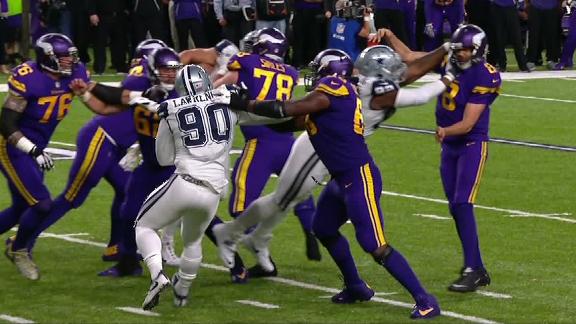 MINNEAPOLIS -- On a night when the Minnesota Vikings were once again frustrated with officials, the team's final offensive play proved to be a flash point.

Dallas Cowboys defensive tackle Cedric Thornton hit Vikings quarterback Sam Bradford in the helmet as Bradford threw incomplete on a two-point conversion that could have tied the game, but officials did not call a penalty. After the Vikings' 17-15 loss, when Bradford was asked what explanation officials had given him for the non-call, the quarterback said, "He told me that I did not get hit in the face mask."

Bradford punctuated his response with a quizzical shrug, but defensive end Brian Robison was more animated.

"At the end of the day, that's a game-changing play and you've got to make those calls," Robison said. "At the end of the game, Bradford gets hit in the face. That's an opportunity for us to score and tie the ballgame, but it doesn't get called."

Referee Tony Corrente's crew penalized the Cowboys 10 times, but Robison didn't back down

"I don't care," he said. "You can look at play in and play out. The problem is the costly penalties that don't get called. When you look at the play that Cowboys quarterback Dak Prescott scrambled [for 14 yards on a 3rd-and-11], there should have been penalties called on that play and they don't.

"It gets to a point where it's too frustrating. I don't know. I'm probably going to get fined for this, I understand that, but somebody has got to step up and say something."

The defensive end, who forced a Prescott fumble late in the third quarter, said he tried to talk to officials, but it was to no avail.

"You always get the excuse," he said. "I understand it's a hard game to ref. I understand all that. I get that there's just so many things going on every single play, but I just feel like sometimes it's just so blatant and obvious that it should be a no-miss call. ... It's just frustrating. You see it every single week. They say you can call holding every single week -- take a look at the tape. They send us stuff every single week, saying, 'Yeah, this should have been called.' It does us no good when the game's over."

The Vikings became the first team to sack Prescott at least three times since Week 2, and Robison's forced fumble was one of two Vikings takeaways. The pressure created by one of the league's best defensive fronts, though, could have teams looking for whatever edge they can find.

"Teams are going to do different things against us, because of what we are able to do with our front four and the blitz package we have," Robison said. "They're going to try to establish the run, and then they're going to try to do some max protections and things like that. You do see, a lot of times, a last-ditch effort, they just grab and hold. It's bad in a way, but at the end of the day, we've got to figure out a way to get it done."

Bradford does not get call during failed two-point conversion
With the Vikings trying to tie the Cowboys on a two-point conversion with 25 seconds left in the game, Sam Bradford overthrows Kyle Rudolph in the end zone. Bradford's face mask gets hit by a defender during the play, but the referees do not make a call.