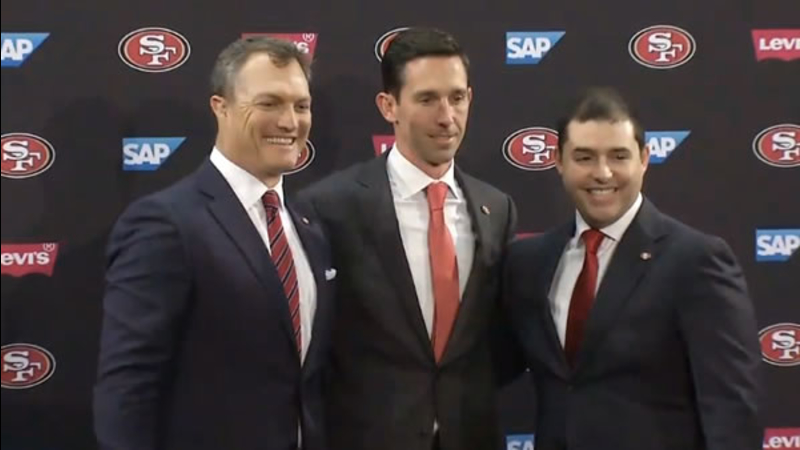 The two toured the locker room on Wednesday.

This is Shanahan's first head coaching job. He was the offensive coordinator of the Atlanta Falcons and is the son of accomplished NFL coach Mike Shanahan. This is also Lynch's first front office job. He's a former Stanford and NFL player and broadcaster.

Mike Shumann spoke to Kyle Shanahan about his new role as the head coach of the San Francisco 49ers.

Shanahan says his first priority is finishing the staff. He wanted this job because he said CEO Jed York is committed to winning and the resources are all there.

This franchise holds a special place in Shanahan's heart. He moved up to the Bay Area in sixth grade and spent time as a ball boy for the 49ers.

Lynch said that he wants former players back in the fold and plans to surround himself with people who knows what he doesn't.

49ers GM John Lynch spoke with Mike Shumann about his plan for the team and new head coach Kyle Shanahan.

Shanahan says he plans on calling all the plays on offense and doesn't see bringing in an offensive coordinator as a priority.

Lynch said at the end of the press conference that quarterback Colin Kaepernick has reached out and they plan on meeting with him soon.

New era for the #49ers. pic.twitter.com/fs9NrTiqkj