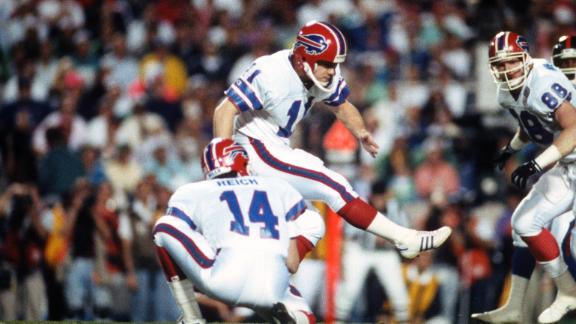 ESPN
By Darren Rovell
Scott Norwood's name will forever have a ring to it in Buffalo, and now Bills fans can get his actual rings, if they so desire.

SCP Auctions is auctioning off the 1990 and 1991 AFC title rings that were given to Norwood, formerly a Bills kicker. Had it not been for Norwood's 47-yard field goal -- his longest attempt on a grass field -- that famously sailed wide right, the Bills would have defeated the New York Giants in Super Bowl XXV. The Bills went on to lose the next three Super Bowls as well in the franchise's only four appearances.

The 1990 ring is expected to command more money, said Dan Imler, SCP Auctions vice president, because had Norwood not missed the kick in the Super Bowl at the end of that season, the Bills would have owned Super Bowl rings. Imler said the company's conservative estimate for the 1990 ring is $15,000.

Imler said the rings are not coming directly from Norwood, but it is the first time they are publicly on sale. Asked who the ideal buyer might be, Imler said it would be a Bills fan.

"I think this would mean more to a Bills fan," Imler said. "But the Buckner ball originally went to Charlie Sheen [a Mets fan], and the Bartman ball went to Cubs fans who blew it up."

Norwood retired after the 1991 season. Twenty years later, in 2011, he returned for the first time to Ralph Wilson Stadium to be honored by the Bills and received a Distinguished Service Award for his work in the local community.