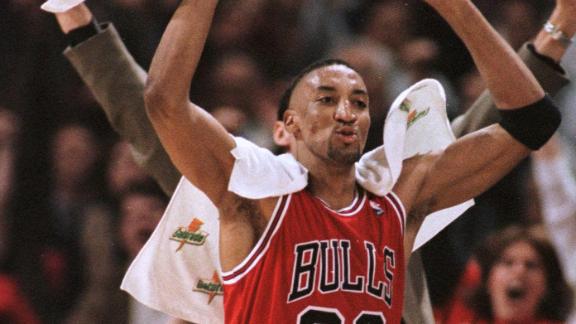 The 2015-16 Golden State Warriors might have eclipsed the record for regular-season wins, but their failure to win a championship means the 1995-96 Chicago Bulls are still the greatest team in NBA history, at least according to two of that team's most vocal players.

Scottie Pippen was asked at the end of an interview with ESPN Radio's Mike & Mike on Monday who the greatest team in NBA history was after the Cleveland Cavaliers rallied from a 3-1 series deficit to stun the Warriors and win the NBA Finals in seven games.

Dennis Rodman expressed a similar sentiment in a tweet he posted after Game 7.

Pippen, who earlier this year said he thought the 1995-96 Bulls would sweep this year's Warriors squad, admitted he was pulling for the Cavaliers to win the Finals, but said with their 73-win regular season, the Warriors "truly have the record."

The Warriors are coached by Steve Kerr, another member of that 1995-96 Bulls team. He said after the game the Warriors were "stunned," but said the better team won the NBA Finals.

"That's the beauty of the NBA playoffs. You play a seven-game series. The best team wins and they were better than us in this series," Kerr said.

But Pippen said there's "a different pressure" in the postseason, "based on that season, especially." It was a pressure he and the Bulls had to endure themselves when they went into the playoffs after a 72-10 season. That Bulls team steamrolled through the postseason, though, going 15-3 en route to an NBA Finals win where they beat the Seattle SuperSonics in six games.

"We had done so well and now we're faced with the same thing that the Warriors were faced with. Can this team be considered one of the greatest teams? Well, you can't be considered a great team until you win a championship.

"No matter how well you do in the regular season, it has to be capped off with a championship, to really mark your legacy in the game. That's where we see Golden State had some failure there. They lost their dominance throughout the playoffs."