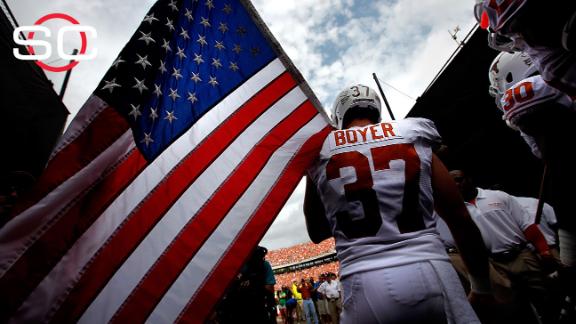 RENTON, Wash. -- U.S. Army veteran and former Texas long snapper Nate Boyer will get his chance to make an NFL roster in Seattle.

The Seahawks reached an agreement with Boyer as an undrafted free agent on Saturday, giving the 34-year-old former member of the U.S. Army Special Forces a chance to continue his football career that started as a walk-on with the Longhorns.

"You fall in love through the process with guys and give people opportunities for different reasons all through the draft," Seattle general manager John Schneider said. "Through a good friend of mine I've become aware of who this guy is at his core and what he represents and what he's done every single year at Texas and three tours and coming out of high school, he's just a phenomenal person. And he's a competitor, and he's tough and he represents a lot of really, really cool things that quite frankly I think will be good for all of us to be around."

In an interview on NFL Network, Boyer said he was called by Seattle coach Pete Carroll after the draft concluded and offered the chance to join the Seahawks.

Boyer did tours in Afghanistan and Iraq. He was part of the Green Berets and earned a Bronze Star.

And then he learned how to be a long snapper.

Boyer walked on to the football program at Texas and eventually won the starting job. He was the long snapper for the Longhorns his final three seasons.

"The thing about Nate is he's such a hard worker," Texas coach Charlie Strong said in a statement. "Any time someone represents your country, when you talk about courage, you talk about honor, that's what it's all about. I love him so much. He did a great job, he's an unbelievable leader, and he's going to be truly missed in our program."

Boyer had been working out in Los Angeles trying to put on weight after playing his college career at 195 pounds. He told NFL Network he had just eaten a sandwich when Carroll called.

"I think he's going to hit somebody," Carroll said of Boyer. "It's a great opportunity for us to have a guy come to the program with his background and all that. We cherish competitors. We cherish tough guys. We cherish guys that can overcome odds and he's done all of that."