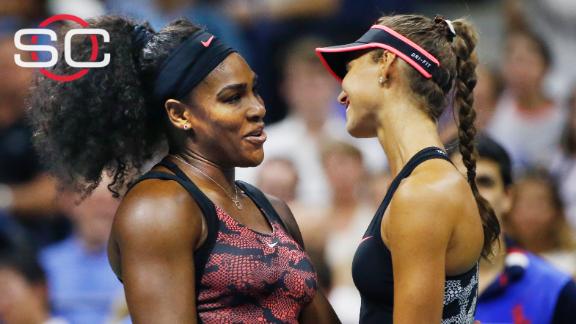 NEW YORK --Serena Williams began her bid to complete a calendar-year Grand Slam by moving into the second round of the US Open when her opponent, 86th-ranked Vitalia Diatchenko of Russia, stopped playing because of an injury with the American ahead 6-0, 2-0.

The match lasted only 27 minutes. Williams won 32 of the 37 points they played.

Diatchenko was visited by a trainer during the first set and got her left foot and ankle taped.

Next for Williams is a match against Kiki Bertens of the Netherlands.

Williams is trying to become the first player to win all four Grand Slam tournaments in a season since Steffi Graf in 1988.

While Williams is off to a dream start, the same can't be said for the other seeded players in the women's field.

The quarter of the women's draw at the US Open that was supposed to feature third-ranked Maria Sharapova is running out of seeded players fast.

A day after Sharapova withdrew because of a lingering right-leg injury, four of the seven remaining seeds in the quarter lost early Monday: No. 7 Ana Ivanovic, No. 10 Carla Suarez-Navarro, No. 21 Jelena Jankovic and No. 30 Svetlana Kuznetsova. Only No. 13 Ekaterina Makarova, No. 17 Elina Svitolina and No. 25 Eugenie Bouchard had won.

Ivanovic lost her first-round match against Dominika Cibulkova, a former top-10 player and Australian Open runner-up whose ranking had fallen to 50th because of injury.

Cibulkova won 6-3, 3-6, 6-3 in the tournament's first match at Arthur Ashe Stadium. She had undergone surgery on her left Achilles in February and missed more than four months.

Ivanovic, the 2008 French Open champ and a former No. 1 player, was one of the few women in the field who have defeated Serena Williams in a Grand Slam match, beating her at the 2014 Australian Open. Cibulkova went on to reach the final at that tournament, losing to Li Na.

Cibulkova was among the seeded players being upset in the first round of the past two US Opens, including a loss to 15-year-old American CiCi Bellis a year ago.

In other action, CoCo Vandeweghe beat fellow American Sloane Stephens in straight sets -- and stopped to talk about it in the middle.

Vandeweghe, ranked 45th in the world, won 6-4, 6-3 to follow up her breakthrough run to the Wimbledon quarterfinals, where she pushed Sharapova to three sets. After winning the first set Monday, Vandeweghe agreed to do an interview with ESPN, an unusual move that had other players chirping on Twitter.

Vandeweghe kept her focus and said in an on-court interview after that match: "In general, I'm a sports fan. For anybody to have an insight into an athlete's mind is a positive."

For Stephens, the No. 29 seed, it was her third first-round exit in her past six Grand Slam tournaments, after she reached at least the fourth round in six straight before that.

Vandeweghe next faces another American, 101st-ranked Bethanie Mattek-Sands. The winner of their match could meet Serena in the third round.

Venus Williams, meanwhile, won a tough three-set match, bouncing back after failing to close out the win in the second.

Williams had a chance to serve out the second set, then wasted four match points in the tiebreaker. Undaunted, she promptly broke Puig's serve to open the third and stayed ahead from there to win in 2 hours, 40 minutes.

Puig, 21, reached the fourth round at Wimbledon in 2013, but has now lost in the first round at her past three major tournaments.

Jessica Pegula, a daughter of the owners of the Bills and the Sabres, won in her Grand Slam debut Monday, upsetting French Open quarterfinalist Alison Van Uytvanck in straight sets, 7-5, 6-3.

Pegula, 21, is ranked 260th and had to advance through qualifying to make the field. She clinched her spot in the main draw by beating Melanie Oudin, the darling of the 2009 US Open as a 17-year-old quarterfinalist.

Van Uytvanck, also 21, is ranked 55th but is now 1-5 in tour-level matches since her run at Roland Garros.

Serena wastes no time
Serena Williams defeats Vitalia Diatchenko, who had to retire after two games in the second set, in 27 minutes to win her first-round match at the US Open.

Serena happy to finish first match at US Open
Serena Williams tells ESPN's Mary Joe Fernandez that she is going to treat each match as if she has nothing to lose, after advancing to the second round of the US Open.