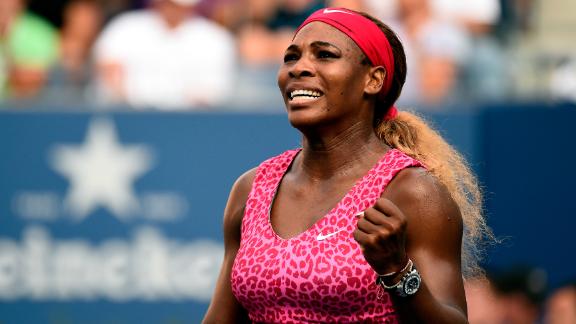 NEW YORK -- Overcome by heat and humidity in the second set of her US Open semifinal, China'sPeng Shuaipaused between points to clutch at her left thigh and put her weight on her racket as if it were a cane.

Still, she tried to continue Friday against Caroline Wozniacki.

One point later, Peng dropped her racket and grabbed at her right knee, then staggered toward the wall behind the baseline and leaned against it, wiping away tears, until a trainer ran to her side. Others arrived, too: a doctor, the chair umpire, a tournament official, a security guard, a ballkid with an umbrella to offer shelter from the sun.

Fighting pain in both legs and her back, a limping Peng was helped over to a hallway adjacent to the court, where it was determined she had heat illness and needed treatment. In all, it was a 10-minute delay, which Wozniacki used to practice serving. Yet again, Peng tried to play on. She stuck it out for six more points, before collapsing to the ground, resting on her hands and knees as Wozniacki walked around the net to check on her. Peng stopped while trailing 7-6 (1), 4-3, allowing Denmark's Wozniacki to reach her second Grand Slam final.

At a news conference more than four hours later, Peng said she was feeling better. She was not sure whether, in the end, she was the one who said she had to retire or was told to (although tournament director David Brewer said it was Peng's decision).

Peng, who is 28, did recall how she reacted when the doctor suggested it might be a good idea to quit.

"I said, 'No, no, no. I don't want to give up. I want to try one more time," said Peng, who was playing in her first semifinal in 37 career major tournaments. "I knew I'm not going to stay maybe too long, but I just want to try, you know. I just wanted to challenge her one more time."

Eventually, Peng was taken away in a wheelchair, closing the scary and surreal scene.

"It was really hard to watch," said the 10th-seeded Wozniacki, who lost the 2009 US Open title match. "To see her struggling out there -- I just wanted to make sure she was OK."

In Sunday's final, Wozniacki will face good pal Serena Williams, who overwhelmed 17th-seeded Ekaterina Makarova of Russia 6-1, 6-3 to extend her US Open winning streak to 20 matches. If she can make that 21 in a row, the No. 1-ranked Williams will become the first woman since Chris Evert in the 1970s to win three consecutive titles at the tournament.

"I can say: Yes, she's much better than everyone," Makarova said, when asked to compare Williams to today's other top players.

Seeking a sixth US Open championship and 18th major singles title overall, which would tie her with Evert and Martina Navratilova, Williams has won all 12 sets she's played these two weeks. While warming up for her semifinal -- in which she won nine straight games and 22 of 24 points in one stretch -- Williams saw on TV what was happening to Peng.

"I was really, really, really saddened by it. She's such a great person. We train sometimes at the same academy," Williams said. "You never want to see anyone go out like that."

Peng, who spoke during the tournament about nearly being forced to quit tennis after having heart surgery at age 12, began showing signs of distress early in the second set, rubbing her legs between points.

When things got really bad, she said, she felt cramping that made it hard to breathe.

Players are not allowed to get medical treatment from a trainer or doctor in the middle of a game if all that is wrong is cramping. If that's what makes them take a break during the course of play, they can be docked a point -- or even a full game -- for taking too much time.

But a broader diagnosis of heat illness does make a player eligible for treatment.

"It was determined that it would not be physically harmful for her to go back out and try to play tennis again," Brewer said.

Wozniacki did not complain -- while all of this was happening or later at her news conference -- about the lack of a penalty for time violation.

She was, however, thrown off a bit by the whole scene.

"First of all, you want her to be OK," Wozniacki said. "Then you also are thinking she might still be able to compete, so you have to kind of ... try and think about yourself as well and just say, 'OK, she might just go out there and start to hit winners.' So you have to be ready for everything."

Serena On Final
Serena Williams looks ahead to the US Open final versus Caroline Wozniacki.

60-Second Slice: Day 12
Prim Siripipat runs through the biggest storylines of Day 12 at the US Open, including a scary moment for Peng Shuai, some tennis fashion plates, and find out who set up a "frenemies" final.

Wozniacki Into Final
Caroline Wozniacki won her semifinal match against Peng Shuai, who had to retire from the match due to injury.