Seton Hall stuns No. 6 Villanova for second upset this week 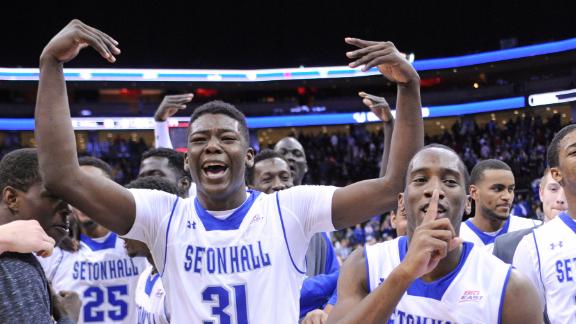 NEWARK, N.J. -- Seton Hall is back with the best in the Big East Conference.

Freshman Khadeen Carrington hit a go-ahead, spinning layup with 1:38 to play in overtime and Seton Hall knocked off its second ranked foe this week, defeating No. 6 Villanova 66-61 on Saturday.

"The fact that we were able to prove ourselves and beat two top-15 teams in the country, I think it shows a lot about us," said Pirates point guard Sterling Gibbs, who scored 20 points. "We really stuck together. We're a young team, but at the same time we're really talented and really tough."

The Pirates also won despite having the highly talented Isaiah Whitehead sidelined for a third straight game with a foot injury. Fellow freshman Angel Degado was limited to four points and 15 minutes by foul problems.

"We knew we were a good team," said Carrington, who scored a career-high 17 points. "But it showed that we are getting better."

Daniel Ochefu had a career day for Villanova with 19 points and 24 rebounds, personal bests. Darrun Hilliard added 14 points before fouling out.

"Any time we lose is very disappointing,' Ochefu said. "We just have to take this as a learning experience. It's very humbling to take this loss to the team that beat us in the Big East tournament last year."

Carrington's drive gave Seton Hall a 62-61 lead. After Ryan Arcidiacono missed a drive at the other end, he added two free throws with 22.5 seconds to go after the Pirates got an offensive rebound following Sterling Gibbs' 3-point attempt.

"Anybody who loves the game wants the ball," Carrington said. "I try to make big plays and that play they started cutting off my left, so I started spinning right and it was wide open."

Arcidiacono then turned over the ball with the Wildcats' looking for a tying 3-pointer with 14 seconds left, and Jaren Sina iced the game with two free throws.

"It was a great college basketball game, man. It was fun to be a part of it . great atmosphere, outstanding players, plays," Wright said. "Seton Hall just got us at the end. "

There were four ties in the final six minutes, with neither team leading by more than two points after Gibbs tied the game with an off-balance 3-pointer.

Both teams had a chance to win in the final seconds. Gibbs had a drive roll around the rim in the final 10 seconds, and Hilliard had a good look from 3-point range bound off the front rim at the buzzer.

The foul-marred game had an ugly incident early in the second half. Villanova's Josh Hart kicked Seton Hall's Angel Delgado in the shin as the big man went to retrieve a loose ball, leaving him writhing in pain.

Hart, who had fallen to the court when he kicked out his leg, was booed every time he touched the ball after that.

The officials reviewed the videotape about 15 seconds after the incident and assessed a flagrant foul against Hart. Gibbs took the first free throws and made them, but the officials then ruled Delgado had to take the shots and he missed both.

Seton Hall: The last time the Pirates beat ranked teams in consecutive games was in 2005-06, when they knocked off No. 15 North Carolina State and No. 25 Syracuse. They have not been ranked since the 2011-12 season.

Seton Hall: at Xavier on Wednesday.

FREE THROWS: The game was decided at the line. The Pirates made 20 of 26. The Wildcats were 20 of 35. "We keep shooting that way, we're going to win a lot of games," Seton Hall coach Kevin Willard said.