Seven ejected as No. 14 Baylor falls 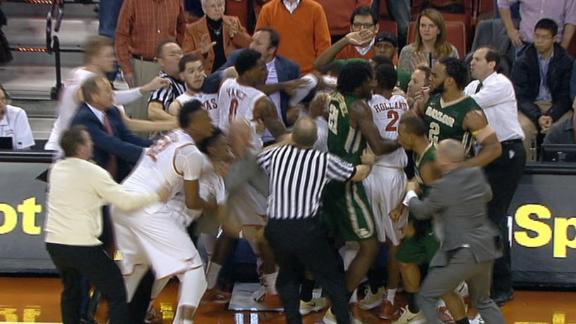 Seven players were ejected in overtime ofTexas' 61-59 win over No. 14 Bayloron Monday night after they left their respective benches to join a shoving match between two opposing players.

Taylor and O'Neale battled for a loose ball with 1:57 to play in overtime. A frustrated Taylor rose from the floor after he was hit in the mouth by what appeared to be an incidental elbow by O'Neale during the tussle for the loose ball. Texas assistant Chris Ogden then rushed to midcourt and attempted to separate the players, but within seconds, multiple players from both squads had joined the ruckus.

"That's just the competitive nature of the game. My teammates had my back on that play," Taylor said. "Unfortunately, some guys got thrown out of the game, but just knowing the fight in their heart is there really comforts me."

"I think you saw a typical rivalry game," Baylor coach Scott Drew said. "Two teams that really competed hard and didn't shoot well after a quick turnaround. ... I was disappointed the game had to end like that, as far as players leaving and being ejected for coming off the bench."

According to NCAA rules, "leaving the bench area during a fight situation as bench personnel but not participating in the fight" results in an automatic ejection.

Taylor, whose lip was bleeding after the skirmish, scored the game-winning floater in the final seconds of the game. Myles Turner blocked Kenny Chery's shot on the other end to secure the victory for Texas, a team on the NCAA tournament bubble.

"I think [the referees] did a great job," Drew said. "They explained it and said, get your teams, calm them down, let's find out if anyone did anything wrong. They complimented both coaching staffs for doing a good job breaking up the altercation. Again, these are heated, rivalry games. Credit both teams for not throwing a punch or doing anything to get someone suspended."

After the game was over, several players exchanged words as fans booed Baylor off the court.

"When the game's over, players can't do that," Texas coach RickBarnes said, according to the Waco Tribune-Herald. "I told [Texas forward] Jon Holmes, 'You better be bigger than any situation like that.' I don't care what happens. You can't do that.'"

The Tribune-Herald reported that both coaches said the ejected players will not be suspended because no punches were thrown.

The win was Barnes' 400th victory at Texas. 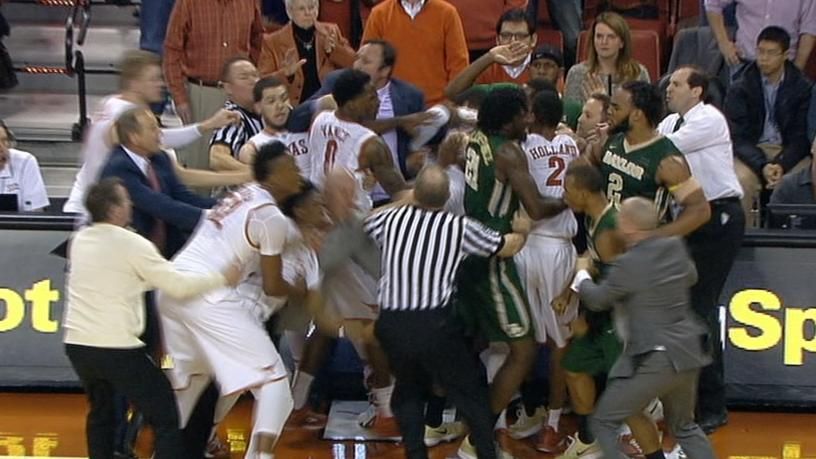 Baylor And Texas Get Into Altercation
After Texas guard Isaiah Taylor and Baylor forward Royce O'Neale fought for a loose ball, both teams got into a heated skirmish in which multiple players from each side left the bench. Seven players were ultimately ejected after this incident.