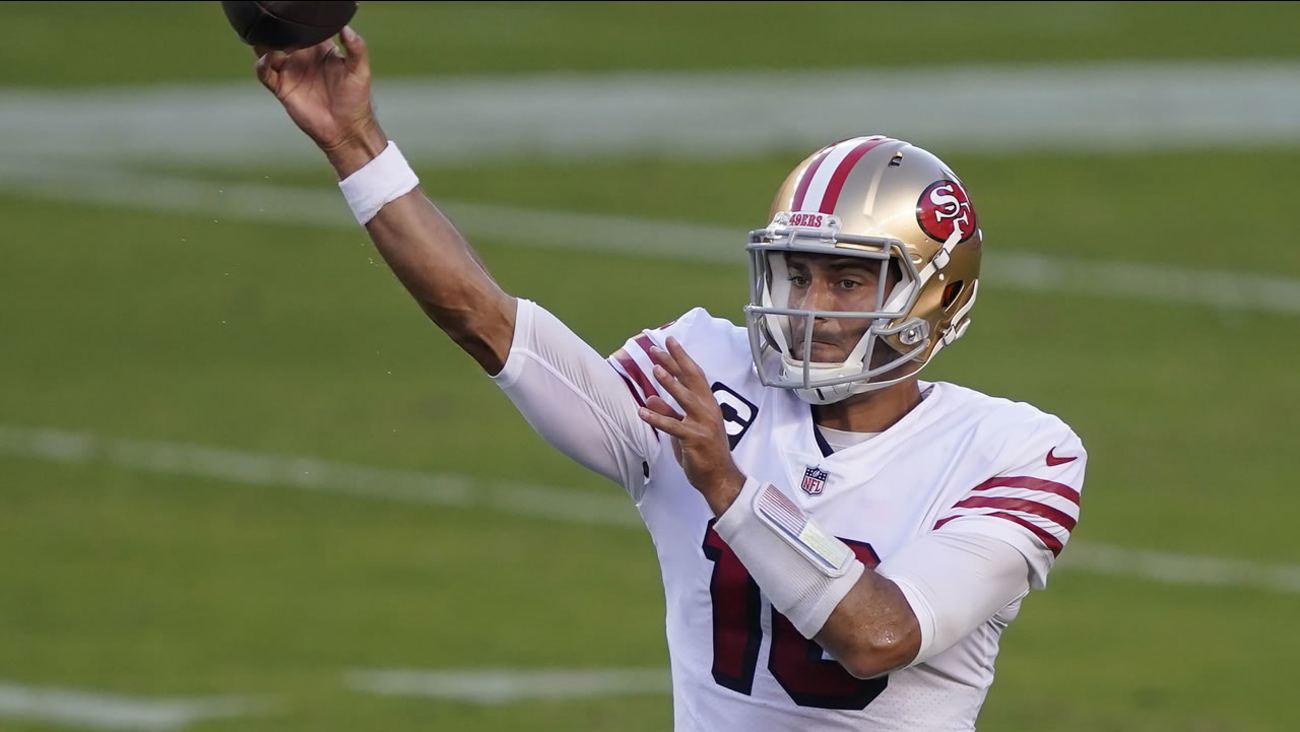 SANTA CLARA, Calif. -- Jimmy Garoppolo threw three touchdown passes in the first half, and Jason Verrett's first interception in more than four years helped give the San Francisco 49ers a 24-16 victory over the Los Angeles Rams on Sunday night.

Garoppolo bounced back strong against the Rams to help the 49ers (3-3) snap a two-game skid.

The quarterback's Sunday success comes after a rough home loss last week to the Miami Dolphins, in which he got pulled at halftime after struggling to make plays on a sprained ankle.

And while the 49ers didn't exactly air it out on the opening drive, Garoppolo staked the Niners to a 21-6 halftime lead over the Rams (4-2) by working the short passing game and connecting on TDs with Deebo Samuel, George Kittle and Brandon Aiyuk.

Also, one week after getting stopped on an early fourth-and-1 gamble, the Niners converted in a big way.

Garoppolo found Kittle on a one-on-one matchup with Darious Williams on a fourth-and-2 play that turned into a 44-yard TD.

San Francisco's defense then took over in the second half and stepped up with some key stops.

Los Angeles got in the red zone on its first possession of the third quarter, but settled for a field goal after Andrew Whitworth committed a false start on third-and-1.

The Rams were in position to cut even more into the deficit before Dre Greenlaw stopped Darrell Henderson for a 1-yard loss on second-and-goal from the 1, Cooper Kupp dropped a pass in the end zone on third down, and Verrett came up with his interception on fourth down.

Verrett has ended up on injured reserve in five of his six seasons in the NFL, but he has gotten back to his 2015 Pro Bowl level this season for the 49ers, helping fill the void created by an injured Richard Sherman.

Verrett's interception was part of a rough day overall for Goff, who also missed an open Kupp on a deep ball earlier in the second half. Goff went 19 for 38 for 198 yards with two touchdowns and one interception.

Garoppolo was unable to keep up his fast start to the game but still finished 23 for 33 for 268 yards.

Up next, the 49ers will visit the New England Patriots on Sunday, Oct. 25, and the Rams will host the Chicago Bears in Los Angeles on Monday, Oct. 26.
Report a correction or typo
Related topics:
sportssan franciscosan francisco 49ersjimmy garoppololos angeles ramsnflfootballlevi's stadium
Copyright © 2021 by The Associated Press. All Rights Reserved.
More Videos
From CNN Newsource affiliates
TOP STORIES