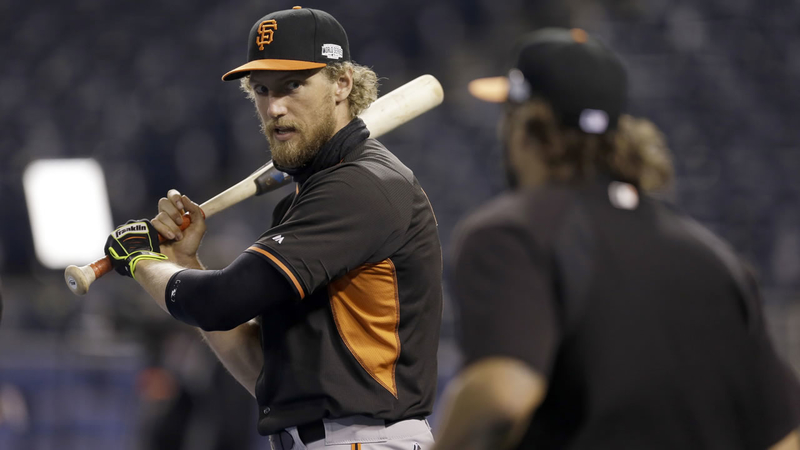 SAN FRANCISCO (KGO) -- The San Francisco Giants arrived in Kansas City Monday, where they hope to bring home their third World Series trophy in five years. They are energized after a commanding win in Game 5 Sunday night at AT&T Park.

The Giants had a police escort to San Francisco International Airport, where three planes were prepped to take 600 people -- executives, players, and their families -- to Kansas City.

Fans lined the sidewalks around AT&T Park; some yelled out to the players, telling them thanks for a great year and wishing them luck. Fans tells us they just know the team will come back as World Series champions.


At Philz Coffee across from AT&T Park they'll be watching Game 6 on TV, but the barristas see Hunter Pence in person all the time he orders the Tesora orginal blend.

Giants CEO Larry Baer told ABC7 News that the mood on the plane will be very businesslike. There will be a little sleep, but mainly people will be quiet and getting mentally prepared. He says they know they're going into a tough environment, they've been there before for the first two games, and they say it was loud.

When asked why they didn't leave Sunday night so they could practice Monday night, he said they want to keep the team on their body clock, with their usual sleep rhythm. They wanted them to be with their families and get a good night sleep.

VIDEO: Giants fans prepare for Game 6 or the World Series


He added that the team's feeling a bit nostalgic, since there are no more games left at AT&T Park. But that there's not time to feel sad or sentimental yet, right now they're focused on clinching the title.

When asked what the team's plans might be for a parade, he said they don't talk about that and they're just focusing on the next game or two.

For San Francisco residents looking for a place to watch the game, a jumbotron is being set up in front of City Hall at Civic Center Plaza -- a viewing party for you and thousands of Giants fans.

Bumgarner allowed no runs and only four hits, striking out eight Kansas City batters. He frustrated batters all night with his amazing command until the final pitch.

Pablo Sandoval fielded a grounder to third for the last out of the game.

At only 25 years old, Bumgarner becomes the first since 2003 to pitch a complete game shutout in a World Series game. He is now one of the most dominant pitchers ever in the history of the fall classic, winning all four starts, giving up just 12 hits and one run in 31 innings against three teams.

After the game was over, the fans took the party to the streets. Everyone we spoke to were confident the Giants will come back with the championship, winning it on the road just as they did in 2010 and 2012.

"This isn't our first rodeo," said fan Evan Stone. "This is our third go at this."

Stone and his friends are making the trip to Kansas City to cheer on the San Francisco Giants for Game 6. They've made the trip to the World Series before, in both 2010 and 2012. But both of those series were over in five games. That didn't happen this time.

"Now it's gonna go at least six maybe seven," Stone said. "So, little bit of a tighter series, hopefully we go to Kansas City and get it done."


There was plenty of orange and black at SFO Monday, headed to the Midwest to cheer the Giants on. Even though all the talk is about Bumgarner, who may not be part of the lineup.

"Hopefully other pitchers can pick up where he left off," Stone said. "What an amazing performance by Madison yesterday."

This is the first World Series for the Stanley's. They scored tickets with the premium hookup.

"Our son is vice president of ticket sales for the Giants," Stanley said. "So we know a kid who knows the inside rules."

Family and the Giants seemed to be a recurring them. Sisters Susan Snowden and Mary Nicodemus have made a friendly wager on the outcome, with one rooting for the Royals and the other cheering for the Giants. They say they'll it'll cause a little sibling rivalry, but they'll settle it over a glass of wine or champagne in the end.

Game 6 is Tuesday at Kaufmann Stadium in Kansas City. If necessary, a decisive Game 7 will be Wednesday. Both start at 5:07 p.m.

You can watch the Giants live on the big screen at Civic Center Plaza on Tuesday. San Francisco is hosting a jumbotron viewing party in front of City Hall. Mayor Ed Lee tweeted the news on Monday.

In a statement, he said: "The game that could clinch may be in Kansas City, but we're creating an October Together opportunity in front of City Hall for families to gather and cheer on the Giants to another World Series victory."