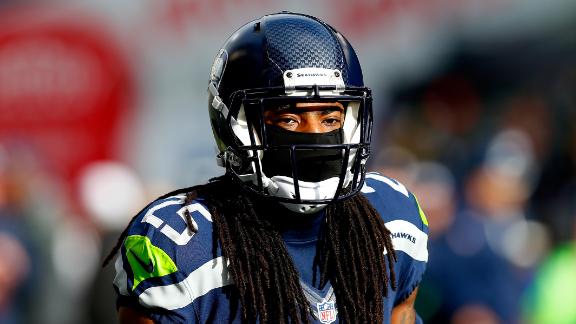 Sherman told ESPN's John Clayton that an MRI taken Monday revealed an elbow sprain. The star cornerback suffered the injury in the second half Sunday but remained in the game as the Seahawks rallied for a 28-22 overtime victory against the Green Bay Packers.

Thomas dislocated his shoulder in the first half Sunday and also underwent an MRI on Monday.

"Both those guys were in dire straits if they could play [after the injuries Sunday] and they didn't flinch," Seahawks coach Pete Carroll said Monday. "Not for a second. Their courage and heart couldn't have been more evident. Their willingness to throw their body out there was so impressive. Earl had a brace on his shoulder, and Richard couldn't straighten his arm out."

Carroll did not provide an update on Thomas, but a source told ESPN's Adam Schefter in a text message that "Earl will play in the Super Bowl, don't even waste any time on the story."

Sherman and Thomas both previously had said Sunday that they will play in the Super Bowl against the New England Patriots.

Sherman was injured on the opening play of the fourth quarter, when he collided with teammate Kam Chancellor while attempting to tackle Green Bay's James Starks. Sherman immediately began favoring his left elbow but stayed on the field despite being yelled at by team trainers.

Thomas had his shoulder placed in a harness after he left the game in the first half. Once the harness was in place, Thomas returned and played the rest of the game.

"I know who I am, I'm a warrior," Thomas said Sunday. "If I can play, I don't care if I can't function really well. I know if I can help the team I'm going to be in there."

Sherman Expects To Play In Super Bowl Despite Sprain
John Clayton discusses Seahawks CB Richard Sherman's sprained elbow, which is not expected to keep Sherman from playing in the Super Bowl.

Earl Thomas: 'We Never Gave Up'
Earl Thomas discusses the Seahawks' comeback against the Packers to win 28-22 in overtime of the NFC Championship Game.