Some testimony on gun disallowed 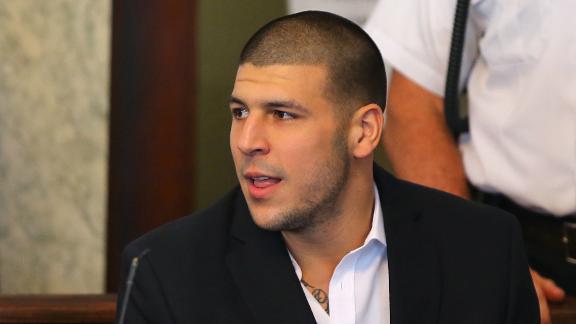 The decision by Superior Court Judge Susan Garsh came as Hernandez's defense team aggressively went after Glock's Kyle Aspinwall. Aspinwall on Wednesday identified a black object in Hernandez's hand several times on the video as a gun and, at times, more specifically as a Glock.

Aspinwall's testimony Wednesday was the most conclusive yet to put a weapon in Hernandez's hand around the time of the slaying of Odin Lloyd, who was dating the sister of Hernandez's fiancee. The defense has said the object could have been a TV remote, iPad or another electronic device.

Garsh initially denied a request Thursday morning by Hernandez lawyer James Sultan to strike Aspinwall's entire testimony. Later, after questioning Aspinwall outside the jury's hearing about how he formed his opinion, Garsh told jurors they must disregard some of his testimony. She told them they can still consider his testimony that identifies the object as a gun based on the back strap, but they can't consider his testimony about other characteristics, including a trigger guard and front strap.

She also reminded them that his testimony is his opinion, and they are free to accept or reject it.

Sultan on Thursday went after Aspinwall's credentials and motivations for concluding that Hernandez was holding a weapon. Aspinwall is a former police chief from New Hampshire and has worked at Glock for two years.

"You knew that the prosecution team wanted you to say that the object in Mr. Hernandez's hand was a handgun and that it was a Glock,'' Sultan asked him.

"Yes, I believe that they were hoping that I could render that opinion,'' Aspinwall replied.

"You are by no means an expert in weapons identification, are you?'' Sultan continued.

"I don't consider myself an expert. No,'' Aspinwall replied.

"You don't have any supernatural powers of vision, do you?'' Sultan added, drawing an objection from the prosecutor, which the judge sustained.

Sultan also showed Aspinwall photos and an example of a pellet gun that had some similar characteristics to a Glock. Aspinwall acknowledged that he could not tell from a photo of several guns whether all of them were real.

Sultan also played several video clips and displayed photos taken from some of the same video that showed Hernandez holding a glowing object, which Aspinwall acknowledged could be an iPad or other similar electronic device.