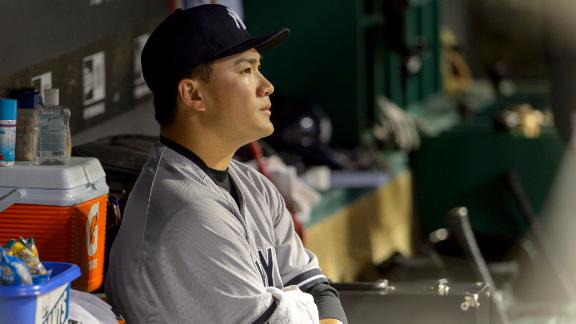 Yankees ace Masahiro Tanaka traveled to New York on Wednesday for an MRI on his pitching arm, a source confirmed to ESPNNewYork.com's Wallace Matthews.

Tanaka reported "a little discomfort" following Tuesday's loss to the Cleveland Indians but did not specify if it was to his elbow or shoulder, according to the source.

Tanaka leads the majors with 12 wins and has anchored the Yankees' injury-riddled rotation in his rookie season.

But the All-Star right-hander struggled Tuesday, allowing season highs of five runs and 10 hits for his third loss in his last four outings.

Tanaka did not indicate in his postgame interview that he was dealing with any type of injury.

"I think it had a lot to do with my command," Tanaka said Tuesday through a translator. "A lot of my pitches were going right down the middle."

The New York Post reported earlier Wednesday that Tanaka would undergo the MRI.

Tanaka is 12-4 with a 2.51 ERA and 135 strikeouts in 18 starts for the Yankees, whose rotation has been beset by injuries to CC Sabathia and Ivan Nova. The 25-year-old signed a seven-year, $155 million contract with the Yankees in January after pitching in Japan for seven seasons.

ESPNNewYork.com's Wallace Matthews and The Associated Press contributed to this report.